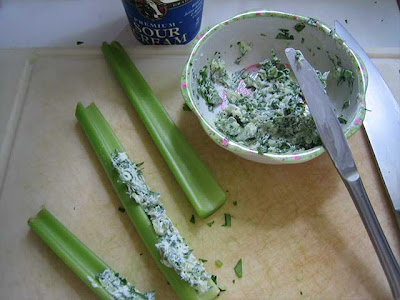 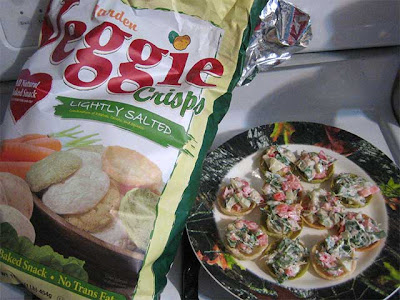 Have a look. It's chopped spinach and onions mixed up with sour cream. By the time you're done chewing you've burned as many calories as this has in it.

Next item is spinach, tomatoes and cucumber mixed in sour cream.
Posted by Janel

Something I've always wanted to do. Someone gave me three balls of red wool yarn, which I had thought was a bit useless since it was lighter than worsted, and it sat around a while. Then I got reading sock patterns on the internet. They said following a sock pattern is an act of faith. You have to trust that this idiocy is going to produce a sock. Okay, so finally I did it!
Knitting on double-pointed needles isn't so bad either, if you remember to knit snugly. We're taught to practice keeping the yarn loose on the needles. If you do that the dpns fall out. But if you knit snugly they don't. In fact it's easy once you practice a little.
And look what I have now, nice wool socks.
The pattern I used was called Joan's Socks. Yep I know the toes are ugly. Between then and now I've practiced Kitchener Stitch so the toes will look better next time. 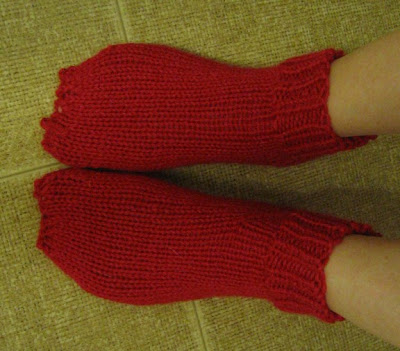 I had no idea how wonderful wool socks were until I walked in them a while. All day long, warm and cushiony. MUCH better than store-bought socks at least the kind I've always bought :-)
Now I wouldn't sell them for fifty bucks.
I'm making some for the boys out of cotton, mostly to practice. See, I've made two (2) socks and I think I'm an expert, and don't have to use patterns, and I'm inventing my own way of doing things which will have to go on my page. So far it's working out! One sock is done and the boys can't agree on whose sock it will be. I might have to make another pair before anybody gets anything.
Posted by Janel