Dave and Mike in the Lakefair Kids 3k 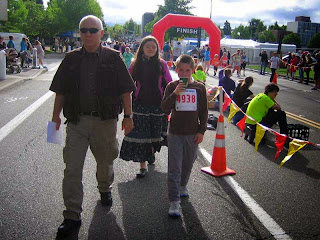 It's part of Olympia's annual Lakefair celebration.  I emailed Ed that there was a race coming up on Saturday at 8:00.
He replied: "Let's do it. Please get the mowing and watering done. I can get some things done Saturday take a shower, eat and leave at 6:00. Sound good?"
No, no, that would be 8:00 in the morning!

We should have left at seven in the morning, but at seven he was in the shower.  At 7:25 when we finally pulled out a light came on over his head, that 8:00 was when the race starts, not when we should be looking for a place to park!  And he's usually the punctual one!
Actually the half marathon started at 7:00, the 8k at 8:00 and the 3k at 8:10.
He made up a few minutes on the way over there, but it was 7:54 when we took the Port of Olympia exit, and Ed told the boys they'd better get ready to miss it.
Poor little guys... sitting in the back seat, with their running clothes on and shoes carefully tied in double knots.
I said Legion would be faster, but Legion turned out to have a great ferris wheel in the middle of it.  The next street was blocked for the race; we got a distant glimpse of the herd of 8k runners starting off at 8:00.
The next street was one-way.  Ed drove as close as State would get and let the boys and me off in the middle of the street.  We cut across in front of traffic which obligingly slowed for us, and RAN.

I couldn't get my purse strap straightened out so I carried it by one corner and went top speed, heels in the air, with the boys trailing me.  I have the advantage of longer legs!

The next street had a lot of runners gathered.  I asked several of them where the registration table was, and got not a glance in response.  They all had their crowd blinders on.  This is not a moment for politeness-- I grabbed some lady by the bicep and yelled, WHERE IS REGISTRATION??! and she pointed me back towards the park.

We sprinted down there across the grass to the grandstand, found the table. Thank goodness for online registration.  They had envelopes all ready to go, just had to find the boys' names.  The lady handed them to us and said, "Run!"  We ran.
She called after us, "The chip trackers have to go on the shoes!"

Whose bright idea was it to put the starting line four blocks away from registration?  We ran two more blocks, then emptied the envelopes onto the sidewalk, sorted it out and started getting numbers pinned on shirts.  The tracker had a diagram on it showing how to thread it into the shoelaces before tying. I untied Dave's shoe and threaded the thing on as fast as I could.  Mike did his own and asked me if it was okay.
It looked okay from the hasty glance I took.
I told Dave to stuff all the junk back into the envelopes while I pinned Mike's number on, then we RAN up the street to the starting line.  The official said three minutes to the start.

We made it.  Whew.  I can relax and take pictures now. 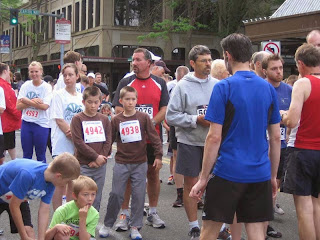 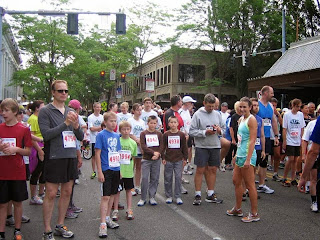 Then Mike tells me the tracker has fallen off his shoe!!!!
I told him to watch for me as he went by and if I found it I'd hand it to him.  More running!  Of course since the street was blocked off we had veered at will from sidewalk to street and back again, which gave me a lot more area to cover when I ran back to search.
I found it a block and a half back, then RAN back to the starting line.  I told Mike to just carry it in his hand.
They had started counting down, 10, 9, 8...

I got a video of the start, then once the whole herd had gone down the street, I wandered to the privacy of the nearest low-hanging tree and burst into tears.
I heard somebody say, "She's got some kind of pain".
Yeah, but it's okay, it's just the pain of being alive.

I'm not a morning person!  I have to get up slowly, and play with my computer for two hours before I'm fully awake and can start doing any kind of work.  If I ignore that and start burning my engines too early, I'll be zonked out and needing a nap by noon.  Or I can sprint in my flipflops for ten minutes at 8:00 am, and there you see the results being commented on by the general public.
At least I had sunglasses in my purse, so I didn't have to endure any further remark once my act was back together.

Ed found a parking spot and walked over with the girls, in time to see the boys run down the street.
The 3k went all the way around Capitol Lake and back, to a huge red arch with FINISH on it, very classy. 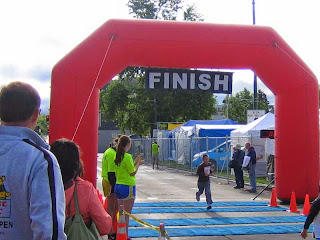 Dave was the 4th kid to come in and still going strong.  It was exciting to see him so soon!
Mike came a few minutes later and was working hard.  With those big shoulders and that taper he's getting on him, he's a magnificent little guy but not a runner!
I saw them give him a funny look when he just dropped his chip into the basket after carrying it in his hand the whole way. 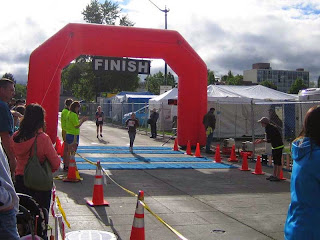 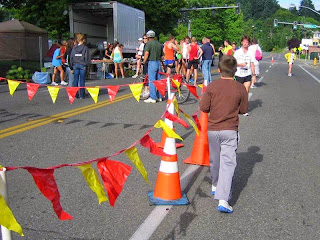 They had slices of watermelon, pastries, vitamin water, energy bars for the finishers. Very well set up event, I must say, with all the closing of the streets and the ribbons and all the officials, though I would like to comment on the four blocks between the registration table and the starting line!

I was still breathing heavily fifteen minutes later.  When it was time to walk to the van my poor old knees were turning into mush, and my leg muscles hurt so much I could hardly walk.  Ed kept turning around to wait for me and wonder why I wasn't keeping up.  The next day my legs hurt so much it was all I could do not to yelp every time I had to walk up the stairs.

What a wuss!  Well, it's nice to know that in case of tsunami, Godzilla, etc, my "run for your life" range is basically twelve blocks.  Any further and I'll just fall over and die. 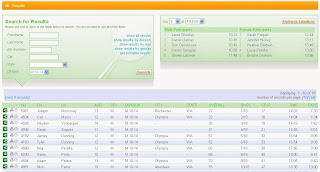 This year all the health nuts have titanium cookware, apparently. 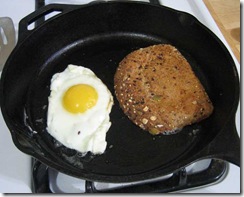 I did love my cast iron!  It's so well seasoned I hardly ever wash it, only wipe with a paper towel.  Cast iron makes things taste delicious.  Here's a photo of my wonderful breakfast, which I took just for joy of my cast iron pan before I was told I couldn't use it any more.  Why can't I use it any more?

I went to the doctor, for the first time I can remember.  I don't really like the whole medical subject, it gives me the creeps.  I do the best I can, of course; I watch these videos that tell me what to eat, and I try, because I want to live as long as possible.  But I don't want to know the science and I don't want to hear the bad news.  Better to continue in happy ignorance as long as possible.

Thanks be to God, there was no bad news.  My test results were all in the middle of normal, except for two results that were out of range:  I had too much "good cholesterol", which made the doctor shake her head and say, "Well, I guess that means you'll never have a heart attack."  And I had too much iron in the blood.

Cooking with cast iron is good for you because it provides dietary iron, but there can be too much of a good thing (and I have always scraped at it very enthusiastically with the spatula while cooking).

So I didn't resist the titanium thing too much. 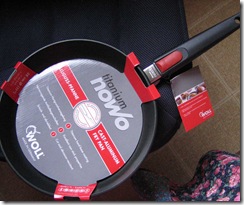 It's not lightweight.  It's titanium coating over a base of solid aluminum, and is even heavier than the cast iron.   (I've taken note of instances in movies where people use cast iron frypans as weapons.  My favorites are Samwise in LOTR, Marian in Raiders of the Lost Ark (that was so cute), and Martin in Grosse Point Blank.  This pan would be an even more effective conking instrument!)

I've never had a pan that heats up this evenly, or is so beautifully non-stick.

The most surprising thing was when I saw the edges of the eggs waving back and forth-- they had cooked and then lifted away from the pan, and the edges were blowing in the breeze created by the heat coming from beneath them!  "Well, I never!" 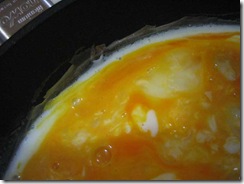 Another batch of chicks with their proud mother hen! 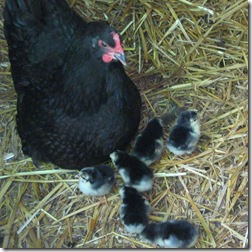 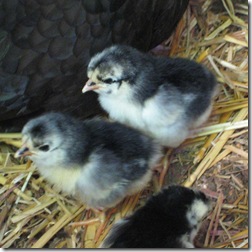 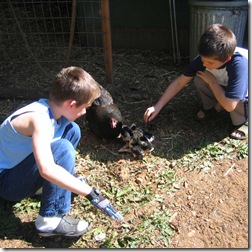 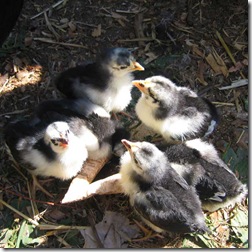 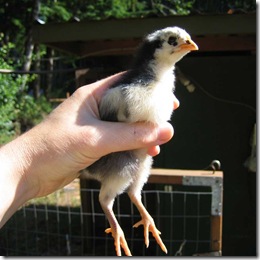 Sometimes I wish I had wiiiiings... so I could flyyyy awayyyy...
Sometimes hands are better! 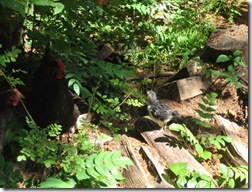 How about that!  I haven't posted in my blog since June! 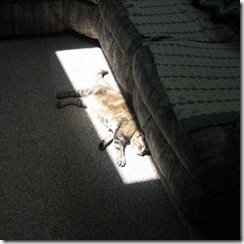 Let's have some miscellaneous.  Starting off with warm and silky... 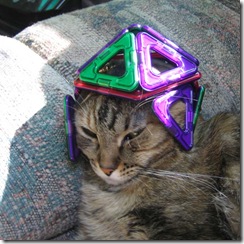 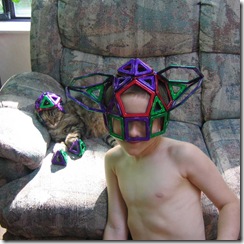 The world's most tolerant kitty.  Look at the kitty gloves! 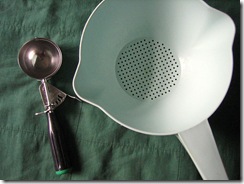 Found in an antique shop: a scoop with metal gears that won't fail six months after buying, and a strainer with the holes only in the bottom, for draining something into a container. 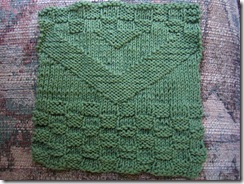 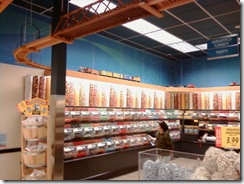 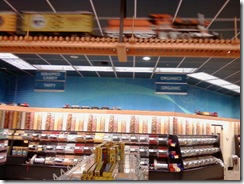 How fiendish can a candy section get?  We stand there and watch the choo-choo train while the sugar communicates with our bloodstream.  Nice.  The word "organic" in the sign means there's better things to eat far over toward the right of the photo, but unfortunately the train is here. 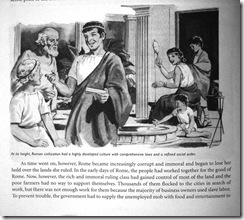 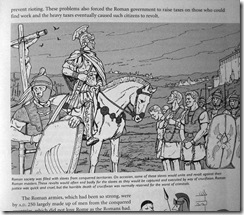 And political commentary!  I found this in a homeschool textbook.  Just cross out Rome and write United States, and isn't this basically what happened? 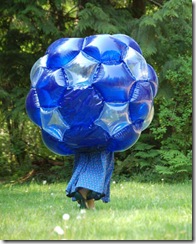 Here's me carrying a bouncy inflatable rolling play thingie (no idea what to call it).  The photographer titles this photo, "Thought Bubble."
Posted by Janel