That's the level of craft I can handle these days  :-)

It's SOOO satisfying for a hoarder type to be able to think of a use for those calendar pages that were just too pretty to throw away! 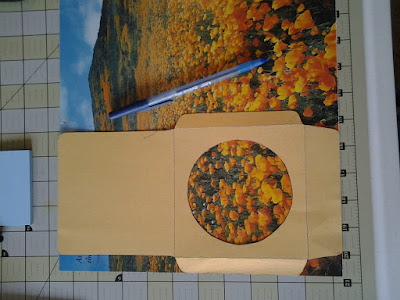 Some time ago I opened up a CD sleeve and copied it onto thin cardboard for tracing. 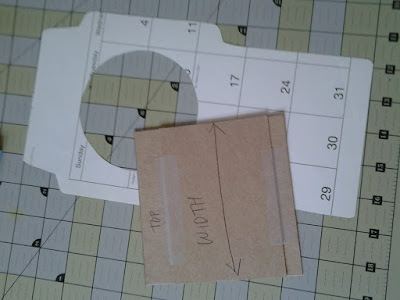 It took some trial and error (as you can see) to get a square just the right size, but once I have that, I can fold the flaps over it and they come out perfect every time. 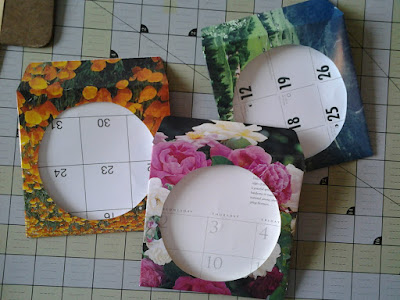 Unlike my larger dreams and plans, a craft on this scale actually ends up being made  :-)


I have some very nice stainless steel pans that came from a relative, but in this little apartment kitchen there's nowhere to store them.  I love my kitchen, LOVE, I'm just saying there isn't room for the pans! 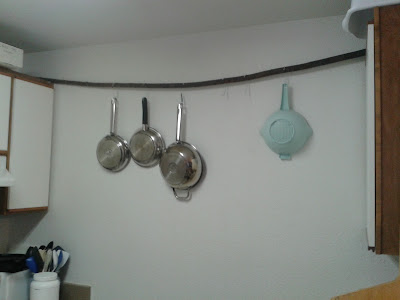 Last year I got clever and harvested a vine maple branch from the woods behind us, crafted some hangers from hangers and there you go.
There's still that certain level of celebration because "there's nobody to stop me!" from dragging forest products indoors to use for stuff.

And yet.  Now we have a saggy branch with the bark still on hanging in my kitchen. 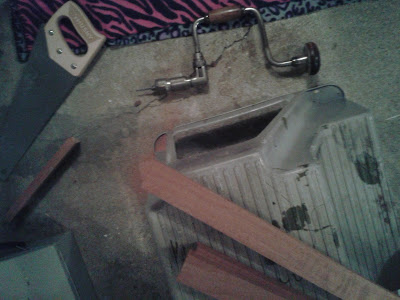 I won't spend money, but I... kind of... took... utilized... swiped... one of the long boards my older daughter had left in my garage.
They were for a project she was going to make and then didn't.
When I had the idea I grabbed that long board and sawed it into the length I needed really quick before my conscience could kick in.

Hey, she had left it there a LONG time!
Yeah, okay, I'm gonna discuss it with her. 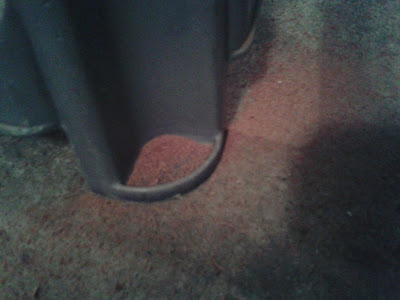 Meanwhile.
There's the hand drill I got at a garage sale for $4 back when I had money :-)
I ALWAYS drill pilot holes, just because I love my non-electric drill so much.

Sudden sidetrip down memory lane, as I remember being fascinated by the piles of sawdust under my dad's table saw.  As a little kid I loved sweeping up that pleasant-smelling sawdust and vacuuming under the mats. 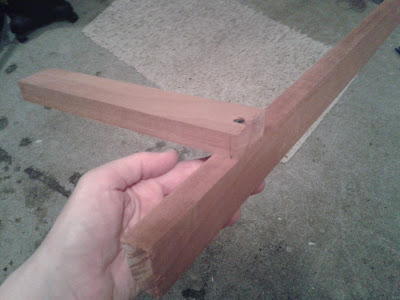 It's not visible here, but of course I put the two legs on the wrong way the first time.
Just take 'em off and reverse 'em, no harm done. 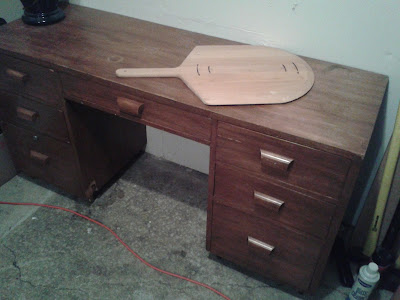 The pizza peel is a storage problem.
Really the only place for it is standing alongside the fridge, then it has to be washed before use, which isn't ideal. 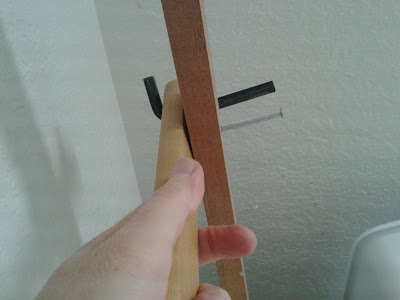 Large allen wrench through the handle, and it just hangs on top of the board.  It's not going anywhere.  The whole setup would have to scoot five inches away from the wall before it could fall down. 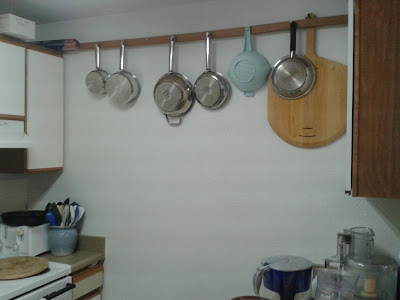 Dave says, "That looks MUCH better."

Apparently that piece of 1x2 oak cost twenty some bucks. Gulp.
DD graciously forgave me and converted the theft into a gift  :-)

Life and My Homemade Pizza are Amazing

Now, here is an example of provision.  Long ago I bought a big pizza stone, but it got left behind.

A pizza stone doesn't qualify as something we "need" to spend money on-- actually very few things qualify as that!
But this one was free!  It may be smaller, but it's prettier  :-) 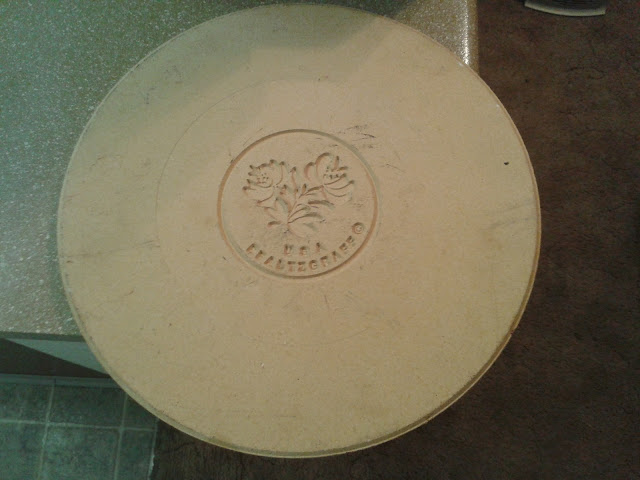 I did get the pizza peel.  (The huge wooden surface with a handle, for getting the pizza in and out of the oven.)

Making homemade pizza is so fun!
In my case there's a slight overtone of defiance that goes with it.
Everybody knows about the famous ex and his soul-curdling horrors, we're used to that.  Every ex is horrible, that's why he's the ex!
Well mine, among his more serious offenses, also told me not to make homemade pizza any more, "Because you trash the whole kitchen doing it!"

That wasn't a health and safety issue like the ones I eventually divorced him for, so, fine.  No more homemade pizza. 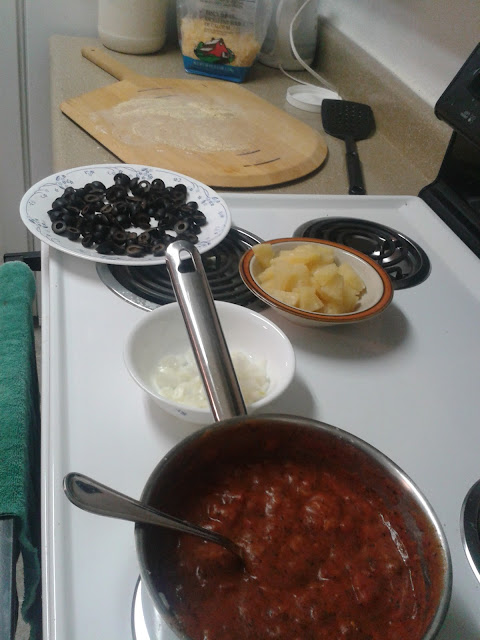 The discount grocery doesn't have organic pizza sauce, so I made my own, with tomato sauce and tomatoes and basil and oregano and garlic and pepper and minced onions sauteed in olive oil first.  Oh, yeah. 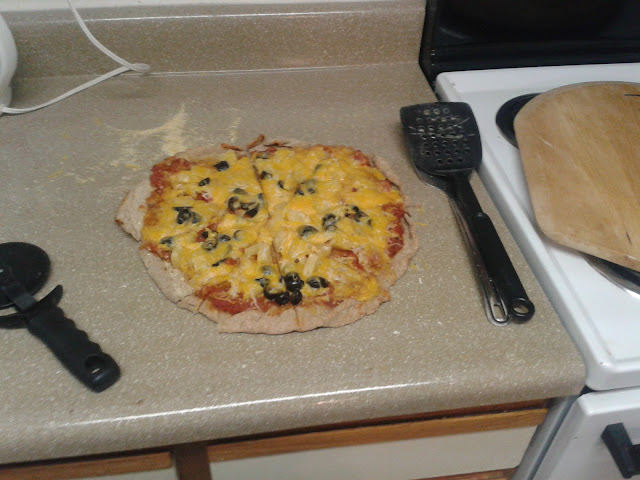 There's an example of why the ex told me not to make pizza any more.

You ought to see the oven.  It doesn't show up in the picture, but there's cornmeal EVERYWHERE.  The cornmeal doesn't go in the pizza, it goes on the peel, so it's the first thing your tongue comes in contact with when you take a bite.  Another little detail to makes it taste all authentic and stuff.
But yeah, I'll have to be cleaning the oven tomorrow.

SO WHAT if I get cornmeal on the floor?  I'll clean it up after! 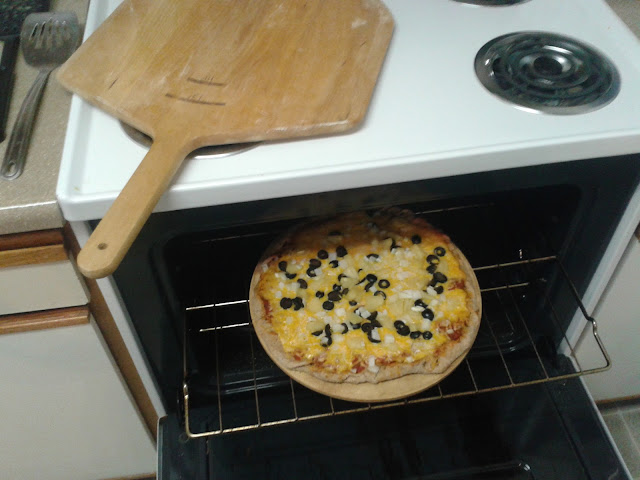 The second pizza can honestly be called round! 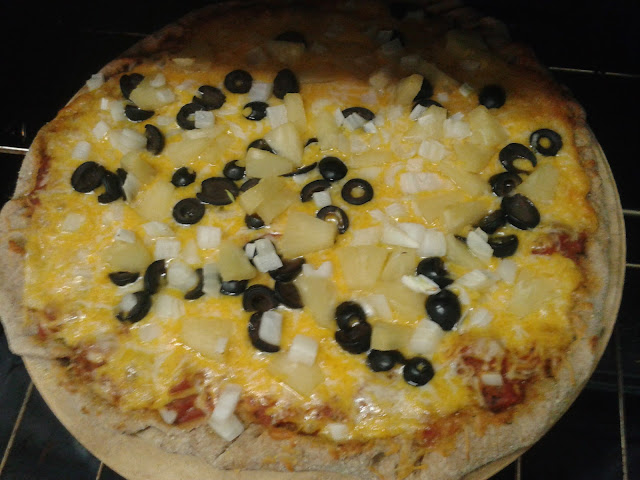 Onions on top of the pizza guarantees that this one's mine.
I thought.
Actually that didn't work, the darlings are old enough now that a few onions won't stop them.  I had to hork down some pizza in a hurry before it all vanished.

Mike said, "This pizza is AMAZING!!!"

Well, wasn't that a fun surprise!  A request for an interview by a Newsweek reporter!

It made me feel famous! Hehe, although it didn't get me any fame-- my page views are the same or actually a little less than average since the article came out  :-)


Whatever else, it was a fun way to shake up a morning.  One minute I had dropped off the kids to school, was sitting down with my breakfast and to-do list, and of course sparing a moment to indulge in re-examination of my pain and familiar dilemmas, with some self-doubt and ennui.  Next thing you know the phone's ringing.
I only had time enough to say, God, don't let me say something stupid!
And then I was chattering all kinds of cheerful, positive and enthusiastic opinions about my almost-forgotten hobby, from the almost-forgotten old days.

After the interview, I was kinda wound up, and on a whim I jumped in the car and zoomed down to Walmart to get one of the new dolls.  Only a few minutes' thought or one minute's research would have told me it'll be a long time before the new body dolls hit the big box store! Oh, well, there were plenty of other things on my shopping list, it wasn't a wasted trip  :-)

The new Curvy dolls can be pre-ordered here:  http://www.barbie.com/en-us#curvy
And I did so as soon as I got home.
Went with this one: 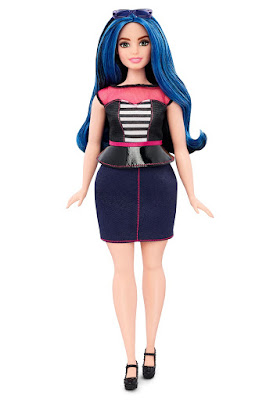 Not only because she was only ten bucks.
I love the hair.  Remember what I said about the purple-hair girl?

It probably would have been this one if not for the bent arm, obviously-dyed hair (I see that blue hair as natural, just not from this planet) and the fact that her face reminds me of someone I know.
And she was $20.  Yes I am that tightfisted.  I'm only allowing myself to *buy* a doll because she'll further the hobby, which does at least pay for itself  :-) 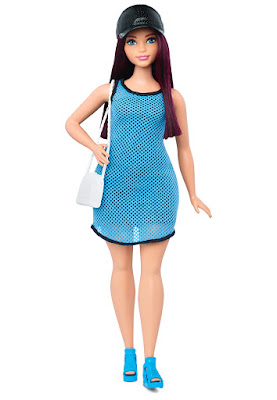 I'm set up to make some clothes, now.
In this apartment, I have a bedroom all to myself-- a little 10x12 square all my own that I love and am so grateful for!  It's not that there's ROOM for a sewing table, it's kinda sitting in the middle and I go around it to go to bed!


I gotta do something with that website.
People still write me occasionally, still send me thank you notes and pictures of what they've made with my patterns, but I've fallen behind the curve.  It's time to get those photos up, fix some errors I know about, make some long-overdue improvements, even add some NEW CONTENT.

I got a notifier yesterday saying Miss Blue has been shipped.
I can't wait! I'm gonna get a wardrobe together for her lickety-split, post the patterns and sell the prototypes.  Yay!

Hey-- did you notice what just happened?
I just admitted that I bought a Barbie doll because I wanted it.
When my early teens turned into my late teens I got self-conscious about my Barbie collection and packed it away, but with so much regret!
Then, I was an outsider, exiled from the pink aisle.
I was so glad once my baby girl was big enough to look around and reach for things, so I could carry that baby girl into the pink aisle!  She was my ticket, my passport back into the world of Barbie!