I fried my computer... yes, I knew about that fan on the video card going out... it was making noise and working intermittently, but to-do lists and priorities and motivation being what they are, the fan eventually failed.  The video card overheated and blew up the motherboard.  Capacitors melted.  Chaos reigned.
The computer guys said, "If you're going to fry your motherboard, you might as well do it right!"

I love it when computer guys approve of me.

Anyway with all my drafts on a C: that I haven't bothered to remove from the carnage yet, as well as my recent photos since the last backup, I haven't a lot to say.

How about some nonsense?  I love random quotes.  Here we go. 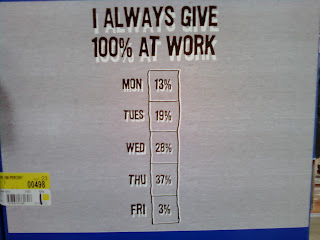 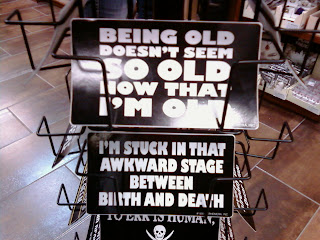 To err is human. To ARR is pirate!

In a perfect world, a man could fix all his relationship issues with WD-40 and duct tape.
(But wait a second, can't he?)

Why do they call it "unwanted fat"? Like anyone really wants it.
Old enough to remember when LOL meant absolutely nothing
Help! I'm making mistakes faster than I can learn from them!
Dealing with people like you only makes me stronger.
Unattended children will be given espresso and a free kitten.
Disturbingly strange, but ultimately loveable.
I wish I was as thin as I was when I thought I was fat.
Nice piercings! Good luck finding work.
Now my little voices are texting me!
The older I get, the more ridiculous you all seem.
Will Work For Hundreds of Thousands of Dollars
The worst things in life are also free.
Am I the only one here without a tattoo or a fish hook in my face?
Do you take me for an idiot? I get that a lot.
I've reached the age where happy hour is a nap
Having a job interferes with my plans for world domination
Am I fired yet?
Don't worry, our staff is accustomed to dumb questions!
Thank you! We're all refreshed and challenged by your unique point of view.
Shut up and let me practice my people skills!
I THINK, therefore I'm overqualified to work here.
Talk nerdy to me.
I'm meeting my needs by ignoring your needs.
Tact is for people who aren't witty enough to be sarcastic.
My life is a bizarre combination of chaos and pizza.
It's easier to answer their dumb questions now than to correct their dumb mistakes later!

Why not?
My footwear is usually pretty not exciting.  I'm that boring type who will wear comfortable, ugly shoes. 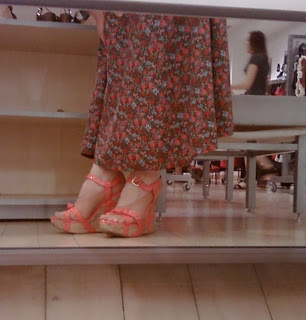 Andrea wanted to go in Charlotte Russe and try on ridiculous shoes, so I tried some on, too  :-)
The slinky shoes are perfect with the church lady dress, eh?

At Payless Shoes they had some boots that actually stood out as a possibility. 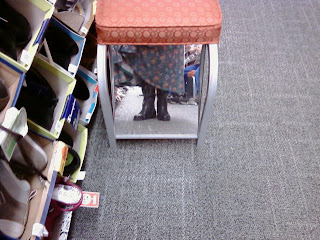 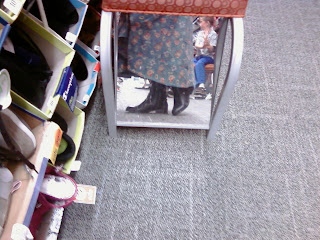 Sixty bucks for made you-know-where, and that's a bummer, but I do need them.
Gone are the days when I used to get a pair of  $200 Land's End boots every couple years, black leather, waterproof-in-the-tanning, Thinsulate and cushioned footbed, made in USA!
My most recent boots were Timberland, and are still going strong and waterproof, but they do look a bit too biker-chick for me, and are now starting to look old.
I'd like to have some presentable boots around just in case I suddenly need to go somewhere nice.  So I got them.

Good luck at the Goodwill, for Karen: 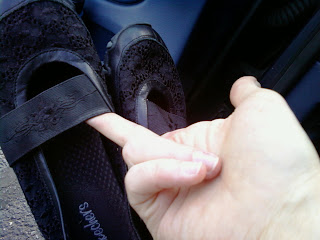 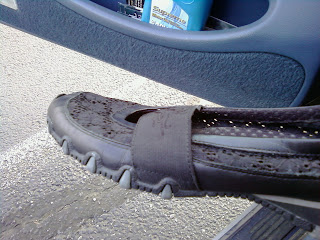 I was a little jealous!  Those are cute shoes!
And then next time at the Goodwill, there were some for me... 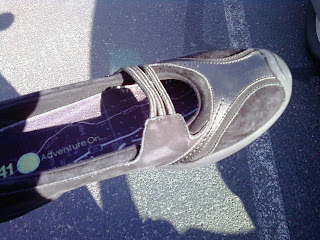 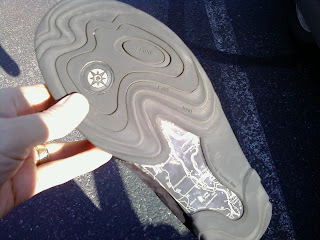 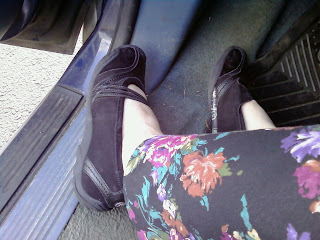 They are totally ME complete to the topographic maps on the bottom!  They are comfortable!  And they were $10.  Win!

How I Lost Twenty Pounds Most Recently

"Most Recently" because, unfortunately, this is trench warfare.  I'm fighting over ground that was conquered before, and lost.

Last time was several years ago, when I was excited about Diet Organizer.  That's tracking software that you can enter everything you eat, and it keeps a tally of calories.  It's a really cool program, lets you customize and enter your own foods and your own exercises, and it goes on computer, Palm OS or Windows Mobile.
Diet + software was a WIN for me because I love any excuse to play with a new program!
I started entering my foods for a while and was astonished to realize that I was regularly taking in 2100 or 2500 calories a day.  I got it down to 1500 or 1700 calories a day and lost weight steadily, got to a nice weight and was happy.

I felt good about my victory, figured I could take it from here and stopped using the program.

What happened next?  BOOM!  Gained it all back on!
Oh sure, it took a while, but left to myself, my eyeball idea of portion size gradually got bigger, my hazy memory of how long ago it was that I'd last eaten gradually got smaller, and there I was again.

It's natural to expect weight gain in my setup.  Living in America, yummy food everywhere, isolated in a house out in the woods, it rains a lot, combined with some really bad depression issues!  Which I tend to self-medicate with chocolate.  It's a disaster waiting to happen and I understand that.

#1, I had a sin issue that actually started to frighten me.  I couldn't let go of a temptation, even when I had decided I WANTED to-- and it got to the point where I obsessed, no longer about the original wrong thought, but about my inability to not obsess!
I tried the old classic, stop eating.  Funny how taking in nothing but water for a week or so improves your whole outlook.
No, really.  It clears the mind.  It lightens the spirits.  It brightens the eyes.  Nothing else really changes, but the garbage flakes off.  There's no fireworks, it's rather like waking up, looking around, and brushing all that nightmare nonsense away.  It feels really good.

#2, I got worried about my digestive system.  That's another thing I tend to hypochondriac about.  I'm falling apart!  If my tummy hurts at all, then my colon probably has at least three bricks in it and I have weeks to live. Don't laugh, I worry about this stuff!

I noticed after the fasting how light and clean I felt, how relaxed my whole innards were,  and what a nice feeling that was, and I wondered how I could preserve it at long as possible.  I thought maybe I'd try just eating things that were really easy to digest.

Funny thing is, eating things that are easy to digest is maintainable!
And even, delightful!

I also watched a couple of good videos:

Fat Head, which is the response to Super Size Me.  The film maker didn't appreciate the premise of Super Size Me, so he proves you can lose weight and get healthy by eating only McDonald's, but using your brain about what you order!  He explains how carbs cause fat and how fat and protein gives energy.

Fat, Sick and Nearly Dead, which is about juicing, which I'm not doing, but it made a lot of good points and was inspirational.

Food Matters, from which I picked up only the important detail about its being a good idea to drink water first thing in the morning.  I don't know why this is important, but I accept that it's doing me good to have water as the first through-put.

So here's the diet:

I get up in the morning and fill a quart jar with water, and drink it while sitting in front of my computer.
(Note to self, be sure to Go before leaving the house.  Not long ago I downed four cups of water then my vitamins with carrot juice, then hopped in the car and ran errands for a couple hours without paying any extra attention to where the nearest restroom might be, until suddenly I almost had a Serious Problem.)

Anyway.  The vitamins.  DH gives me a huge pile of them twice a day which I am expected to swallow.  I'm sure they must be good for me; it's a love / hate relationship.  It boils down to swallowing the vitamins being less unfun than listening to him chew on me about it.  So I swallow the blasted vitamins with carrot juice.

And then, either leftover vegetables from last night, cold from the fridge, or nut mix.  We get these unsalted, raw pecans, cashews, brazil nuts and raisins, awfully pricey mixture, but there's an awful lot of nutrition in it!
And then brush my teeth.  That's another important point.  It's good to get in a habit of keeping the teeth clean ALL the time-- except when eating-- and then brush again.

I tried Fit For Life once, but I really can't handle eating fruit in the morning.  Don't know why.  My system just isn't ready for it and fruit doesn't seem appetizing.  I like to eat fruit for the next meal.  So in the afternoon, I head for the kitchen table, where for lack of anywhere better to put it, all that nice fruit from Costco gets piled.  There's no question of amounts.  Eat all the fruit you like.
And then brush.

From Fit For Life I learned that four o'clock is chocolate time.  If despair hits and I can't handle it, I go for the chocolate.  Chocolate is actually health food, y'know, if it's dark, especially the beet-sweetened kind like Endangered Species.  It's got antioxidants and bioflavenoids and whatever.  Chow down without guilt.  Or Coconut Secret bars, which are basically coconut wrapped in chocolate wrapped in foil and you pay accordingly, $3 for a little thing, but whatever.  They're delightful.

Dinner is meat and veggies. I get a nice big pile on the plate, but it really doesn't take that much of a nice steak, or chicken sausage, or salmon, to feel like good eating.  Cooked carrots, beets, squash, peas, I actually love 'em with salt and butter.  I make sure to cook more than necessary so there'll be leftovers to eat cold the next morning.

I didn't set out to lose weight, I was worried about my mind and guts, and voila, the rest took care of itself   :-)

I feel, right now, like I could do this from now on.  I have zero desire to eat the bread products-- I just don't miss them!  Something made with wheat crosses my lips now and again, it's not forbidden or anything.  But I don't miss it.  Even cinnamon rolls don't attract me.  Yuck, I remember how it feels after eating those things!
I love the cashews, avocadoes, cooked carrots, they're my favorite so why would I need anything else?

We'll have to check in later to see if the news is still good but-- that's another mindset I find is gradually changing these days.  I'm much less concerned for the future.  I'm already old enough to see that the future is HERE, and today is not worth ruining with worries about tomorrow. 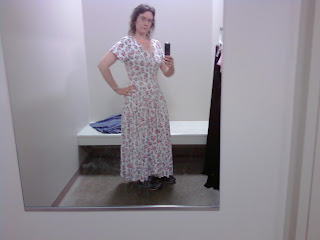 In case you ever wondered what the inside of a Goodwill dressing room looks like  :-)
No idea where I could ever wear that dress, but I bought it anyway! 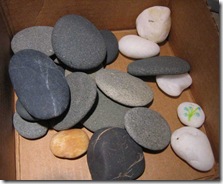 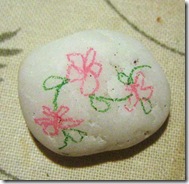 I picked up some smooth little rocks at the beach, with the nifty idea of coloring on them with colored pencil.  Wouldn't that be pretty?  It didn't work out as lovely as I had imagined, because I'm not much of an artist.
Then Karen found the rocks and colored pencils where I'd left them... 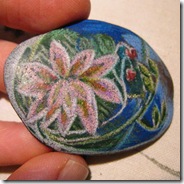 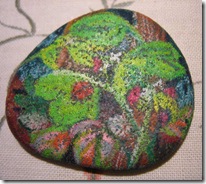