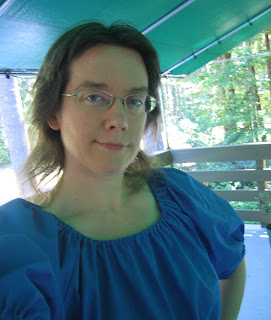 I read in a book long ago that you can sew clothes even if you have only fifteen minutes a day for it, if you just do one step each day.  The key is to leave the sewing area with everything lying just where it should be, ready for the next step the next day, so you don't have to waste any time finding your place again.That works for me.
Today, I was suddenly done!  I love it when I'm just stitching along, get to the end of a seam and realize that was the last one.
I even smiled at the camera (sort of).

I know this is the design in the illustration of "what pudgy ladies should not wear" but... but... I like it! 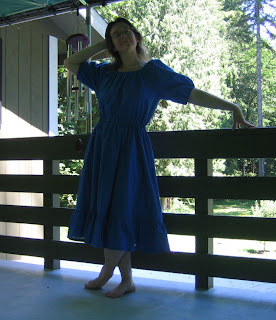 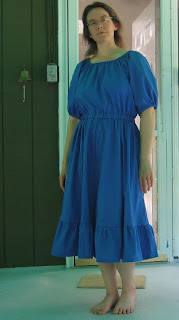 I recently saw a t-shirt that said, "Sarcasm is just one of the free services I offer."

I thought I was the sarcastic type, but when I looked up the word, I'm not!


SARCASM: a keen or bitter taunt : a cutting gibe or rebuke often delivered in a tone of contempt or disgust 2: the use of caustic or stinging remarks or language often with inverted or ironical statement on occasion of an offense or shortcoming with intent to wound the feelings


That's not me!  I don't ever intend to wound anyone's feelings.  Of course I do hurt someone's feelings, that just breaks my little heart… hahahaha.
No, really.  It does.

There’s a better word for what I do.

IRONY: feigned ignorance designed to confound or provoke an antagonist : dissimulation : humor, ridicule, or light sarcasm that adopts a mode of speech the intended implication of which is the opposite of the literal sense of the words (as when expressions of praise are used where blame is meant) : a state of affairs or events that is the reverse of what was or was to be expected : a result opposite to and as if in mockery of the appropriate result *the irony of fate*


IRONY applies chiefly to a way of speaking or writing in which the meaning intended is contrary to that expressed on the surface *beset with confusion and humiliation he said in blunt irony, *I am certainly enjoying myself** but in a more literary or dramatic sense it implies a deeper perception of the discrepancies implicit in life and character or applies to the actual discrepancies (as between appearance and reality, what is promised and what fulfilled, what is intended and what achieved, what seemingly should be and what actually is), applying frequently to a situation in which what results is the direct, often tragic, opposite of what was desired, intended, or worked for *the dramatic irony of the play in which the hero intent upon the greatest good he knows achieves by his very pursuit of it destruction and death* *the patient had sought violent death, but, with the usual irony of life, it was the doctor whom sudden death overcame Havelock Ellis* *an irony of nature that our teeth, which decay so painfully while we live, stop decaying at our death, and outlast all the rest of us Leonard Woolley*
SARCASM applies chiefly to a type of humor intended to cut or wound, often employing ridicule or bitter irony *the satire has become in some instances sarcasm * and heavy sarcasm at that John Woodburn*


Okay, you were dying to have that distinction made, and the confusion cleared up, right?

I think most people who say they are "sarcastic" are using the word incorrectly.  This is irony: 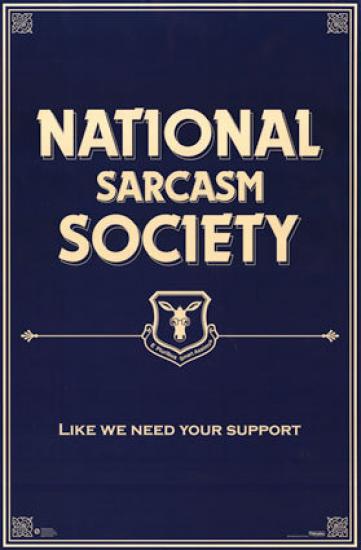