The view out my window at 7:30 this fine morning. Well, it's the day the Lord has made! 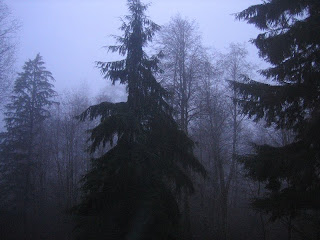 I took a great pic yesterday. I only had my phone cam, wished I had my real camera! Colors came out all screwy so I used Photoshop to try to make them look like they really were. I love finding primaries. Here's a white moon, blue sky, green tree and red monkeybars. My fav is white snow, blue sky and yellow maple, or blue sky, yellow maple and green pine. 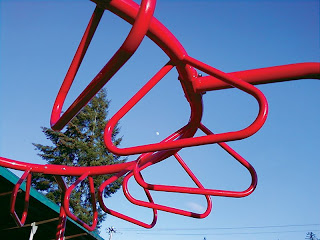 A mother commented that she was glad winter was over. The kids have been sad that winter's over and we didn't get a big snow! But you know what, running around without a coat in January doesn't necessarily mean winter's over. Wait and see!
Posted by Janel

I declare it done. There's a little more yarn left but I think this is big enough. 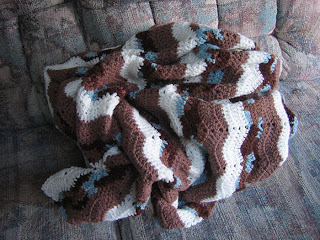 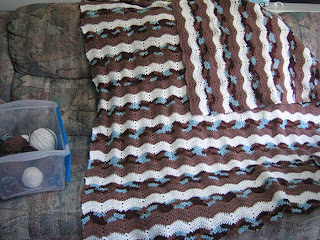 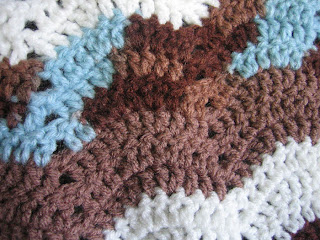 Pictures of me in my nightgown, posted on the internet

Or not, there's such a thing as shame.
So here's just a flat picture :-)
Very happy with how these turned out. They're the flannel and knit I picked up at the same free meeting as the Pfaff last year, with just a little more $2/yd blue flannel added. Almost free nightgowns... 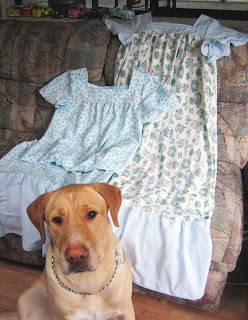 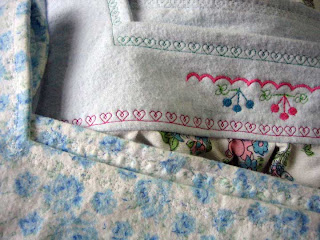 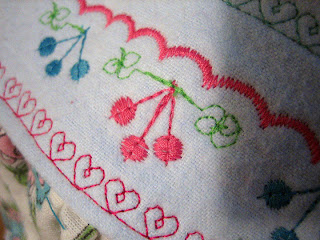 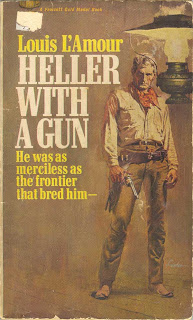 Anyway, this guy's your basic gunfighter character with no background, who watches a traveling theater company head away into trouble with some bad guys disguised as guides, and follows them to save them at the appropriate moment. The theater company includes a gracious antebellum Southern lady whom the gunfighter admires, and she's attracted to him yet with a kind of horror. Her long-time admirer, the theater company manager, can't compete with the animal magnetism going on around here, but he carries his part off as well as he can. They have a couple of showdowns with evildoers and the gentle lady's horrified each time at all the shooting and violence and general lack of manners. The gunfighter's afraid to be around her because he sees himself through her eyes, and at the end of the story, after saving everybody's bacon, he takes himself away quietly in a kind of shame. But there's a young showgirl in the company too, who was the daughter of a westerner, who had tried to help the gunfighter and the gentle lady's romance to work out, telling each good things about the other, sheltering and comforting the gentle lady and handing the gunfighter ammunition when he needed it. At the end, she notices the gunfighter's ridden away, and that the gentle lady and the theater manager are relieved to be at a restaurant in a civilized town again and are sitting down to dinner, and she's like SOMEBODY gimme a horse! Cause she knows which way the gunfighter went :-)
Posted by Janel

Something good about being 40

Independence in the kitchen :-)
I've finally learned to feed myself.

What passes for a recipe nowadays:
a cube of butter
three eggs
two big-spoon scoops of date sugar
a pile of flour until I felt that any more would definitely be too much
a little bit of baking soda on the tip of a spoon
vanilla, accidentally spilled and then most of it soaked back up with a paper towel
a great deal of chopped macadamias!
... baked until they were done.

YUM! A child said, "These are so good! What are they?" 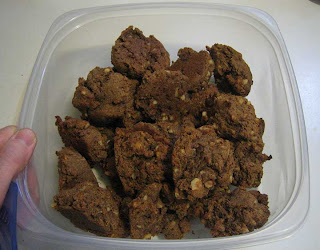 cell phone photography at its best 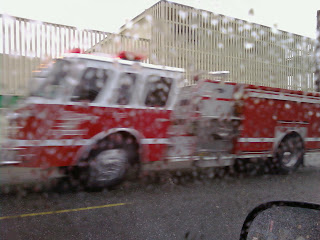 Don't worry, I was pulled over :-)
Posted by Janel 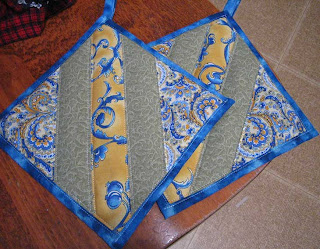 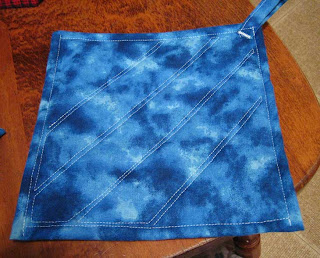 Potholders for Momma! Didn't they come out pretty??


Two passages from Morning and Evening:

"Beginning to sink, he cried, saying, Lord, save me."-Matthew 14:30
Sinking times are praying times with the Lord's servants. Peter neglected prayer at starting upon his venturous journey, but when he began to sink his danger made him a suppliant, and his cry though late was not too late. In our hours of bodily pain and mental anguish, we find ourselves as naturally driven to prayer as the wreck is driven upon the shore by the waves. The fox hies to its hole for protection; the bird flies to the wood for shelter; and even so the tried believer hastens to the mercy seat for safety. Heaven's great harbour of refuge is All-prayer; thousands of weather-beaten vessels have found a haven there, and the moment a storm comes on, it is wise for us to make for it with all sail.
Short prayers are long enough There were but three words in the petition which Peter gasped out, but they were sufficient for his purpose. Not length but strength is desirable. A sense of need is a mighty teacher of brevity. If our prayers had less of the tail feathers of pride and more wing they would be all the better. Verbiage is to devotion as chaff to the wheat. Precious things lie in small compass, and all that is real prayer in many a long address might have been uttered in a petition as short as that of Peter.

"Do as thou hast said."–2 Samuel 7:25
God's promises were never meant to be thrown aside as waste paper; He intended that they should be used. God's gold is not miser's money, but is minted to be traded with. Nothing pleases our Lord better than to see His promises put in circulation; He loves to see His children bring them up to Him, and say, "Lord, do as Thou hast said." We glorify God when we plead His promises. Do you think that God will be any the poorer for giving you the riches He has promised? Do you dream that He will be any the less holy for giving holiness to you? Do you imagine He will be any the less pure for washing you from your sins? He has said "Come now, and let us reason together, saith the Lord: though your sins be as scarlet, they shall be as white as snow; though they be red like crimson they shall be as wool." Faith lays hold upon the promise of pardon, and it does not delay, saying, "This is a precious promise, I wonder if it be true?" but it goes straight to the throne with it, and pleads, "Lord, here is the promise, 'Do as Thou hast said.'" Our Lord replies, "Be it unto thee even as thou wilt." When a Christian grasps a promise, if he do not take it to God, he dishonours Him; but when he hastens to the throne of grace, and cries, "Lord, I have nothing to recommend me but this, 'Thou hast said it;'" then his desire shall be granted. Our heavenly Banker delights to cash His own notes. Never let the promise rust. Draw the word of promise out of its scabbard, and use it with holy violence. Think not that God will be troubled by your importunately reminding Him of His promises. He loves to hear the loud outcries of needy souls. It is His delight to bestow favours. He is more ready to hear than you are to ask. The sun is not weary of shining, nor the fountain of flowing. It is God's nature to keep His promises; therefore go at once to the throne with "Do as Thou hast said."
Posted by Janel

Someone likes this project

This is a project I did not like. I didn't enjoy doing it, nothing went right. I thought it would be a fun puzzle to put all those shapes together, but it was a pain in the rumpus puzzle. These are two fabrics chosen by an eight-year-old boy, and the result's messy at best. Oh, the good part about the fabric choices is you that can't tell where everything went wrong, because it looks exactly as if it HAD been patched together any old way! Then I didn't have enough of the backing, so we had a third fabric also chosen by an eight-year-old.
The result: LOVE. He's running around yelling about how cool his pillow is!
"Look, blue flames!"
"Ooooooh!" 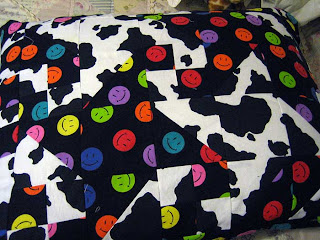 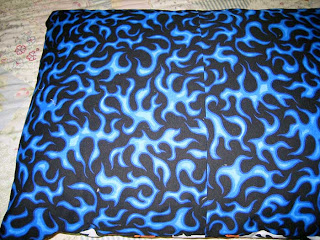 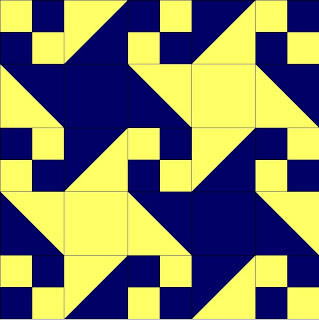 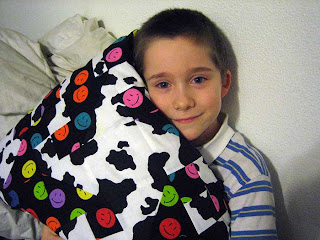 I'm taking two classes, Adobe Flash, and a one-credit class called Online Success. The latter is just learning how to do classy stuff. I can do that!
http://janelwashere.weebly.com/
I'm SO relieved to be back in fun graphics classes again. Math is fun too, or would be if it was a more leisurely pace, but they pile so much into math class! This last one that was causing me to go all freak-out, was having us do four sections a week, and each section contains six to ten new concepts. I'm not exactly a slug at all this, but my distraction level with five kids around is huge. You need a little quiet to understand new things in math.
With graphics class it's basically just tutorials, nothing you really have to "get", it's just another crafts project that can be set aside and later picked up at exactly the same place. And the workload is just a lot less. I don't know why, maybe they think math is supposed to be a serious class, and you're supposed to be grim and desperate all the time?
Posted by Janel

This is a really fun, calm, soothing "find the object" game. Give it a try if you're stressed. Here's a free online preview, good to play at lunch :-)
There's a lot more to the real game!