Finished, she said?  It's not hemmed yet.  But I serged around the edges and wore it to town anyway  :-)

I wanted a really ruffly skirt this time.  Phooey on discretion, I want ruffles.  So I used five gores of skirt 4B, the 6" width (which I don't think is on the site yet but I'll put it up soon, I'm redoing the whole thing!)

This was really, really the end on some of those fabrics.  For instance, here's how one of the blue gore pieces went together... in slivers! 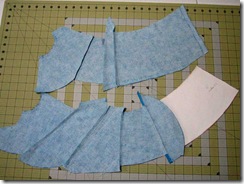 Five gores of skirt 4B produced this.  Very much what I had in mind!   Very ruffly!  But too short for me, only 24" long. 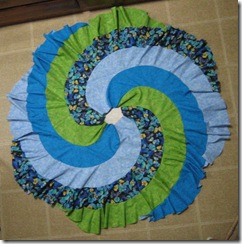 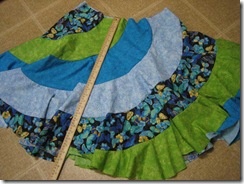 It would be great for a little girl.  For a while I put it away in disgust, pondering whether I should finish it and list it on ebay for some lucky little girl, or try to pick out the whole thing.

Secret weapon!  Mikey to the rescue.  I paid Mike $5 to pick out all those gores for me.  I only had him pick the actual seams, then used the rotary cutter to trim the zigzagging off the edges. 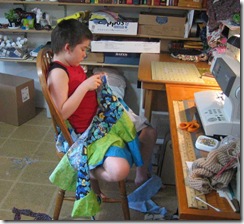 Then I made six more gore sections from Skirt 3, which is a gentler curve, attached those above the others, and sewed the whole thing together again.
I didn't have enough of some of the fabrics, so I used something just close.  It's not too obvious, is it? 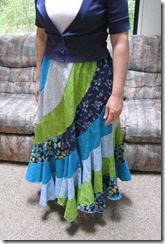 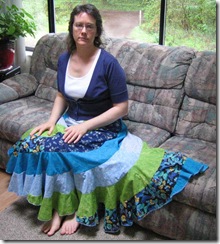 Have you tried sewing three segments (two tops + one curl tip) together creating a "S" curve, but also to give it length?

I am considering it and wanted to know if you have tried it and how it came out.

Making an S shape, I have not ever tried that. I'm not sure what would happen, it would be an interesting experiment though. I might have seen one like that now that I think about it and it looked cool...
If you try it I'd love to know how it comes out!

ur skirts are adorable. I was wondering how to take the length for the spiral skirts? can u explain the draft part of the spiral skirt ?
my gmail id: nalinianbarasu@gmail.com

How long they will be when finished, is, unfortunately, mostly guesswork and testing. A tight spiral loses length very quickly, and adding more sections makes the skirt rufflier instead of longer. The more gentle spiral shape is easier to make into a longer skirt without ending up using a huge amount of fabric.

Not sure what you mean by "the draft part"-- the actual process of creating the spiral shape? I basically just made them up :-)

Thanks for all the hard work on the spiral skirt patterns. I've made about 4 skirts over the past 5 years out of denim mostly, and am making one each for my daughters. I just love them and get compliments on the idea. Thanks for all you do.

Oh thank you! I'm so glad to hear that! I love reports of the patterns working out for people. I'd love to see pictures of what you've made :-)