A Street Fair and a Wallet


A street fair... big, loud, colorful.  The perfect place to feel so very alone.  I wandered around lost in the crowd for a while, then went away to sit looking out at the water and just feel so lonely and sad.

It's okay, it's truth, it's peace, it's much better than it was before.

Oh, where were my kids??  One had already biked down there earlier to check out the event.  One didn't feel like going, one was busy doing something else, and one was a volunteer, hard at work right there at the fair!

That's not the kind of alone I meant.  I meant poetic languishing, LOL!  Poor me, the star of my own tragic romance, with the ocean in the background.

The only picture I took at that event was this one, of a lady wearing something I loved so much I wanted to save the idea.  Surely I could make something like this?  The top is crochet, the skirt is dyed gauze. 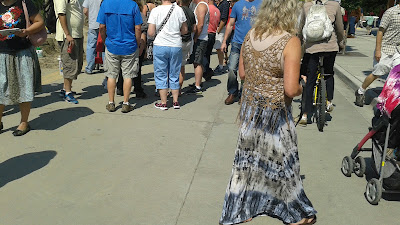 Then I got to thinking.
I wasn't really coveting my neighbor's clothing, because I don't want hers, only one very like it, and I can get one.

The ten commandments, that stern list of shalt nots, are mostly about thoughts, not actions. Ever notice that?
In that case... I have casually violated a great many of them, quite recently, in fact.
I'm not coveting any particular neighbor's husband, but boy, I wish I had one of my own!  A nice one, a husband who wouldn't scream at me until I'm exhausted and then blame his behavior on me.  One who would say nice things or nothing at all.  A nice calm husband to eat what I cook and care when I'm missing.
It's okay to want that, but not to walk around being so casually discontented.  "Everything is not okay because I don't have everything I want."
That's a sin.

Later I went into the public restroom at the dock and found a fat wallet lying on top of the toilet paper holder.  It was one of those big long ones with a clasp, the size of a small purse, and it was LOADED.  The side was stuffed with hundreds, I didn't even dare touch them to get an idea how many there were.  Dozens of credit cards, shopper's cards, insurance info, even an original social security card. The driver's license showed a sweet elderly lady from Idaho. No phone number!
I tried calling one of the Visa cards, but it was obvious that wasn't going to get anywhere.
The police station was only eight blocks away, so I marched over there.
While waiting for the cops to come out and talk to me, I thought about calling Costco.  They have a reputation for helpfulness.  Sure enough, they looked her up by her membership number and said they would let her know her wallet was at the police station.
Meanwhile the cops had come, listened to the end of my phone call, then took the wallet.
One of them made an awe-struck whistle at the amount of money in there.  Yeah, I know, right??
They said they were definitely going to have a word with that lady for putting her whole life into a purse without a strap.
Of course they gave me praise and compliments.  What a good thing it was me who found it, and not one of the "transients" downtown!  They thanked me for saving the old lady from having her identity stolen.

I wandered back home, quite a bit cheered.  My day was made.  That had been so nice!

Then realized something else that made me laugh out loud at myself!

Turning that wallet in like that WAS the most selfish thing I could have done.  Let's face it-- cleaning out the money and dropping the carcass into a mailbox wouldn't have paid me at all, because my poor little conscience would have hurt so badly I wouldn't have enjoyed any part of it.  Peace of mind is what I need the most these days, and I'm not even attracted by any options that would cause me to have less of it!

So what I did is gave up something that couldn't have benefited me anyway, in exchange for a dose of the one thing I crave most at the moment!  Approval!  Attention.  A couple nice, big, friendly cops to tell me, "Hey, you're all right, you did good."