First idea was that cool pattern for making a tunic from only squares and triangles.  This for example (not the original link, but that lady must've found hers at the same old link I did.)  It makes sense!  Of course the back-then people put so much time and effort into making their fabric, that they'd want to use every scrap of it and not have giant chunks of fabric wasted like modern patterns do.  I finally tested that idea using an old bedsheet.

The results were pretty clumsy.  It was too huge with underarm gussets but didn't work very well without them. 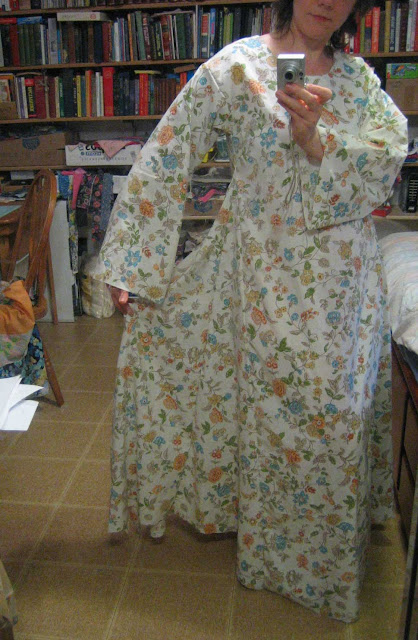 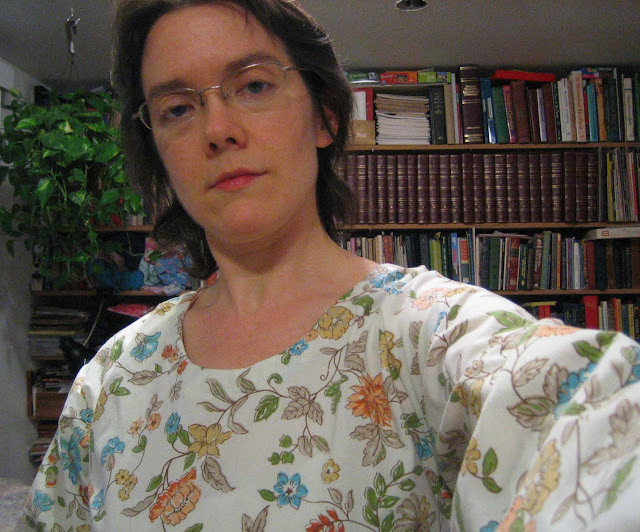 I stuffed that attempt into a box and was disgusted about it for a while.  A few months later I pulled it out and realized it wasn't as bad as all that.  It only needed better-shaped sleeves, and if it was made from a solid color and had some distracting trim added to it, it wouldn't be bad at all.

That's the point when I found myself unable to attend an event I had wanted to attend due to having nothing to wear.  Just as impending nakedness is what it takes to motivate me to sew my regular clothes, so that piqued disappointment one fine Saturday motivated me to get on with my SCA "attempt."

Look!  I have a new goal!  "Medievaloid"


Something is medievaloid if it is not authentic to the middle ages, but looks medieval to the modern eye.
Dresses bought in a fantasy or renaissance faire store are usually medievaloid - they look medieval to the untrained eye but don't quite fit any one time, place or style.
In most cases, especially for beginners, medievaloid fits under the category of "best effort" and passes all but the most critical scrutiny. Where the line is between medievaloid and "just tacky" is hotly debated.

There.  That's going to be the mark towards which I strive, and then I have a chance of hitting it.  I'll just not waste any more time looking at the blogs (I typed "globs" at first) of these ladies who start with the sheep and end up in the 13th century.


The GOAL is to sew something, anything, that looks medievaloid to the untrained eye.  And I can do that!

Actually this might be really fun.  I've always liked "Princess style" better than modern anyway and this'll give me an excuse to go with it.  My crayon masterpieces when I was little usually involved huge skirts and hennins.  I had a gigantic paper doll collection and spent hours drawing dresses for them. Not suits and briefcases, not jeans and a t-shirt...

One of my earliest influences: 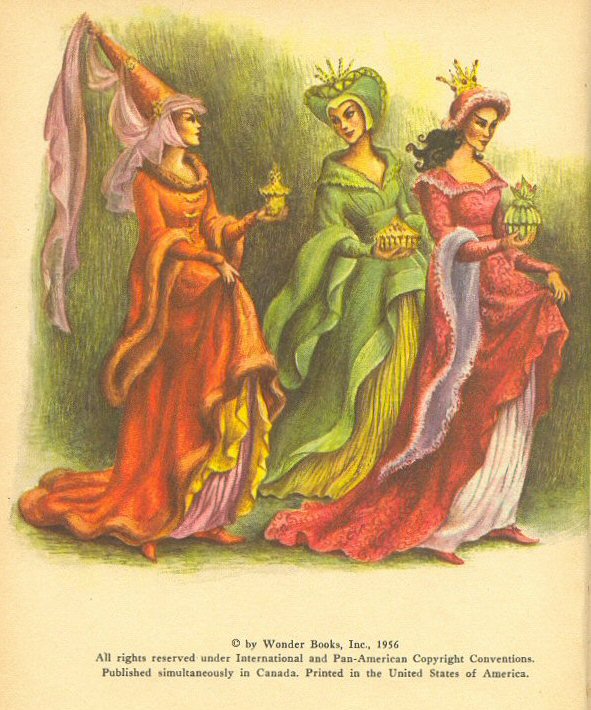 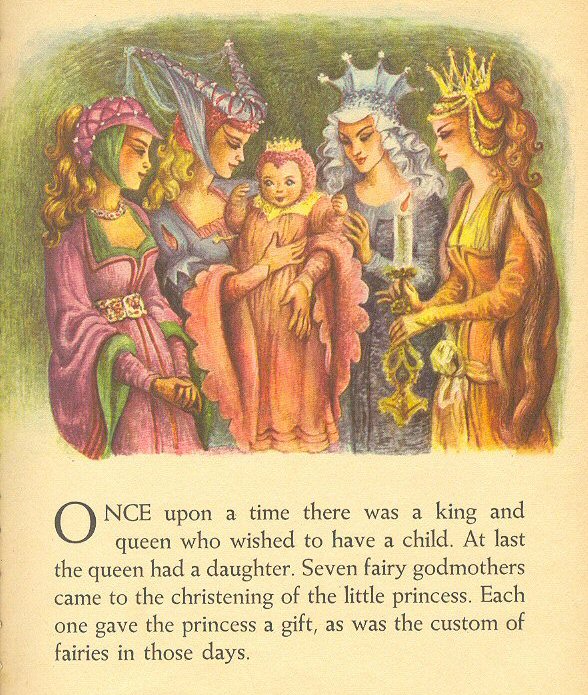 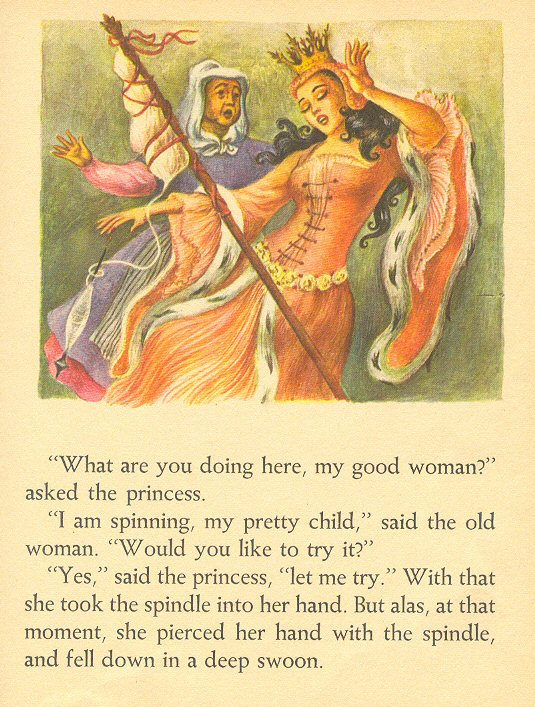 There, that's a good illustration of what can go wrong when you try to get too authentic  :-D

(But if there had been no spinning allowed for the last sixteen years, what was the princess's birthday dress made out of?  Imported polyester?)

First thing to do, is buy some patterns that I'll end up not using.  I already had Simplicity 9929 in my collection, that I bought years ago when it was in print.  I had bought it because I loved it so much, but I thought a costume party would be the only opportunity to wear something like that, and I'd surely never be invited to one.  That was before I heard of the SCA or Renfaire. 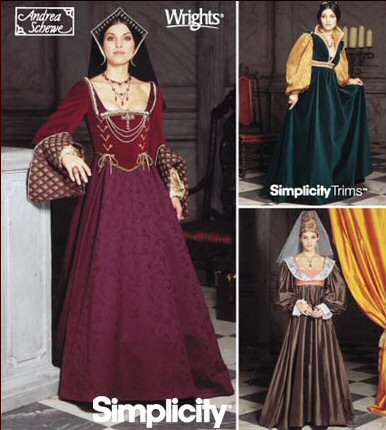 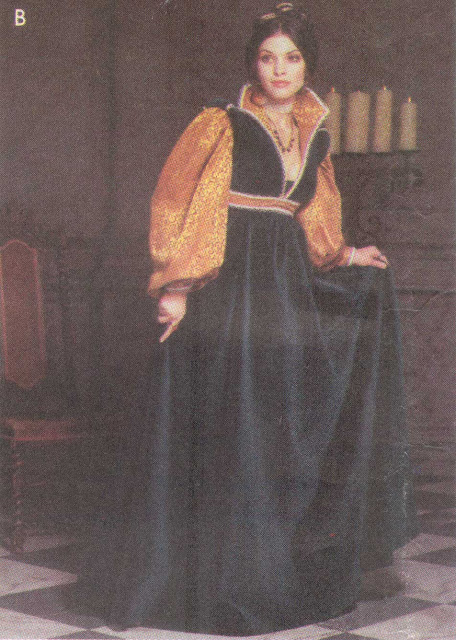 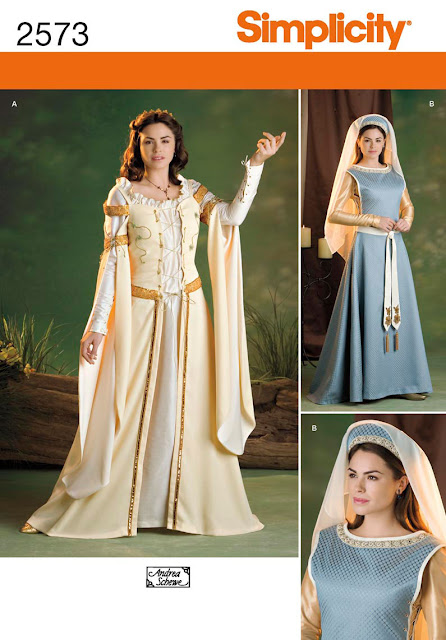 That's probably the only pattern that will end up being used and followed  :-)

But I added another for me, just for fun, since the seller was into combining shipping: 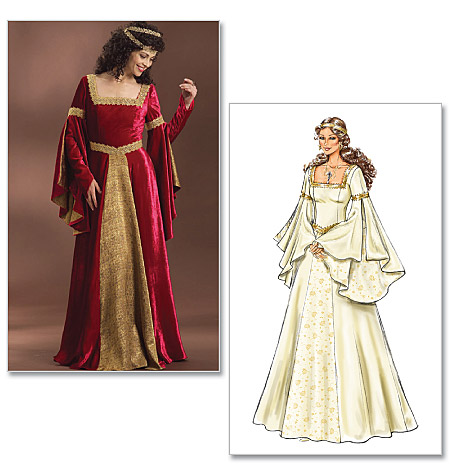 Don't know why; I'll never cut it out.  I like the style, but the neckline is too huge and looks hard to alter, the skirt looks funny and those sleeves would probably end up bugging me.

After regretting that waste of $4 for a while, I got back to the drawing board.  I know I can make something up.  It doesn't have to be fancy, just an attempt, remember? And I'll probably just use my basic pattern that I use for everything else!

I went through my pile of pictures saved from the internet, and made a collage in wallpaper size so all those images would be staring at me from my desktop every day.  Here it is in square shape.  This is my collection of favorites, of outfits that I would like to wear.

(All images are stolen, so apologies to everybody. On the other hand, it is kind of a compliment?  :-) 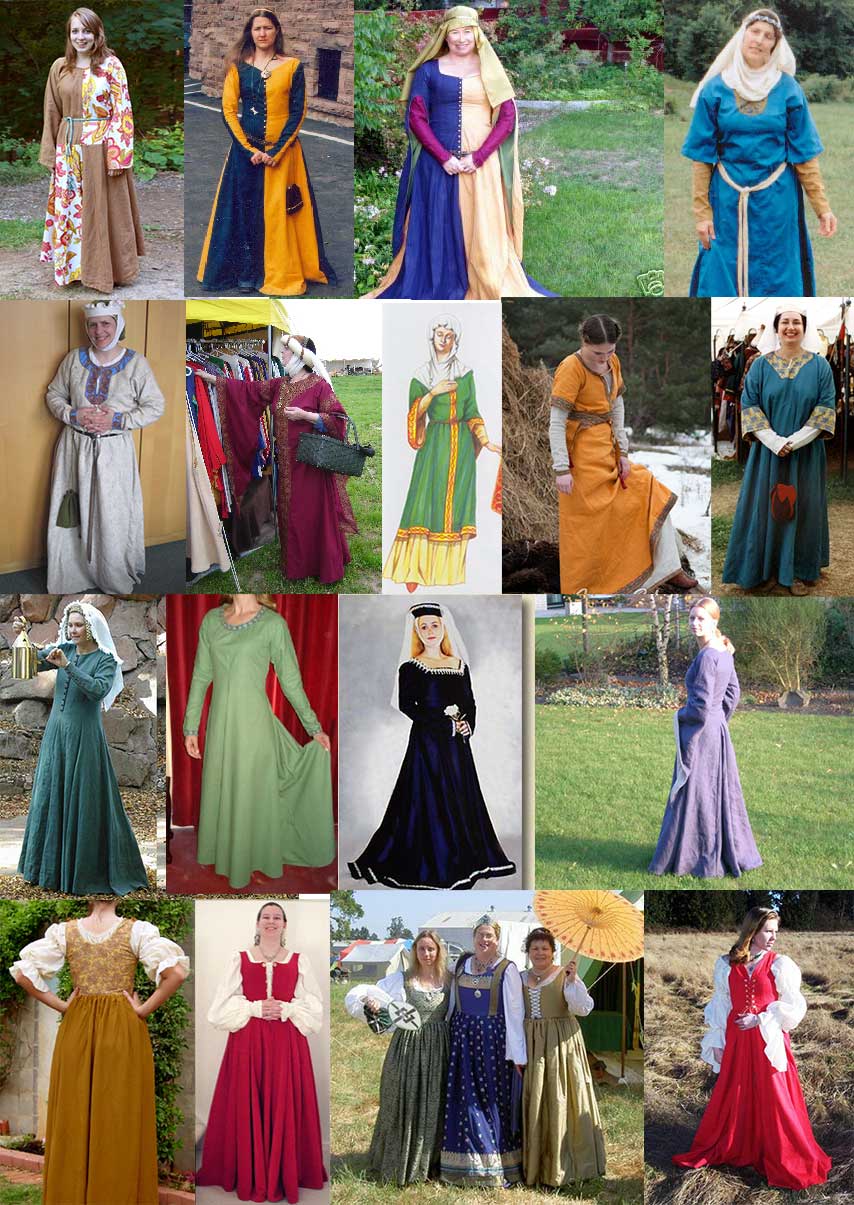 The long jumper over long-sleeve peasant blouse look, I can do that.

Here's my sketches which I keep on the ironing board and look at frequently to keep me going in a direction instead of wandering off into doubtfulness. 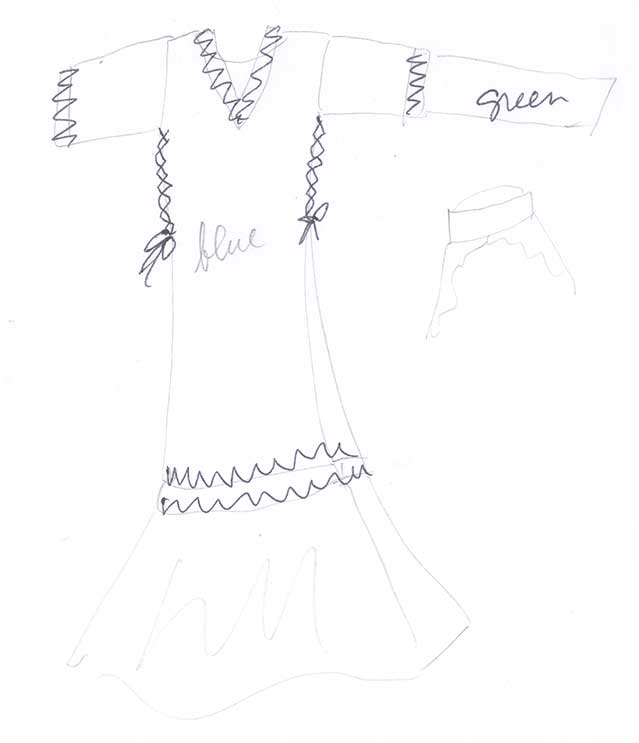 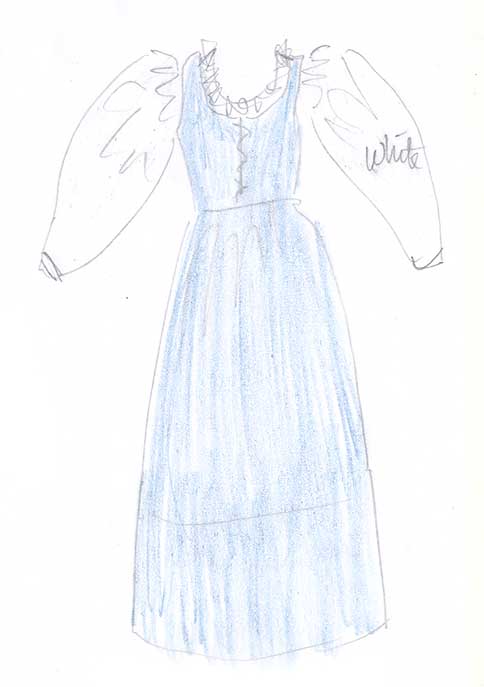 I'll start with the jumper idea.  Here's as far as I've gotten as of last night. 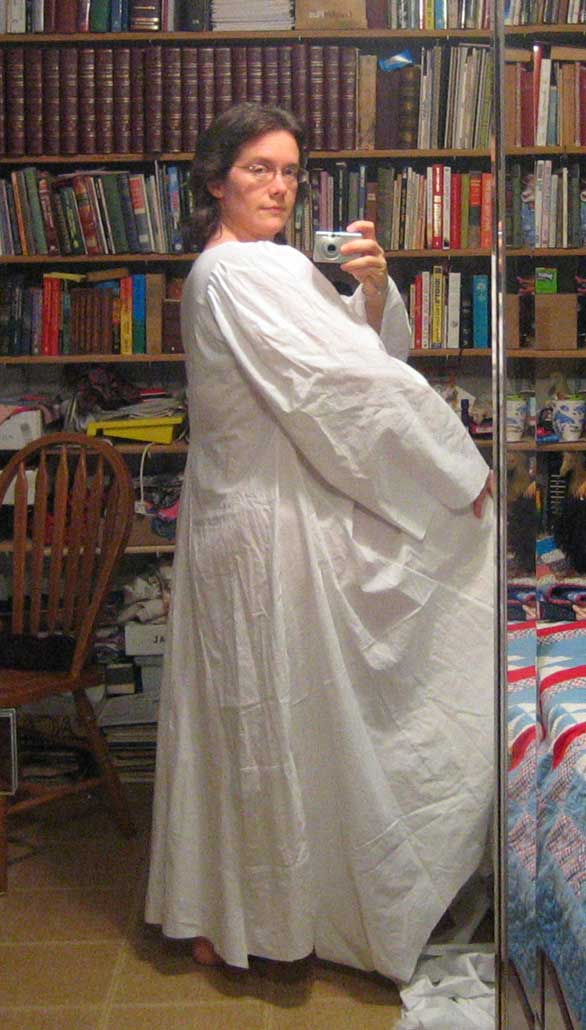 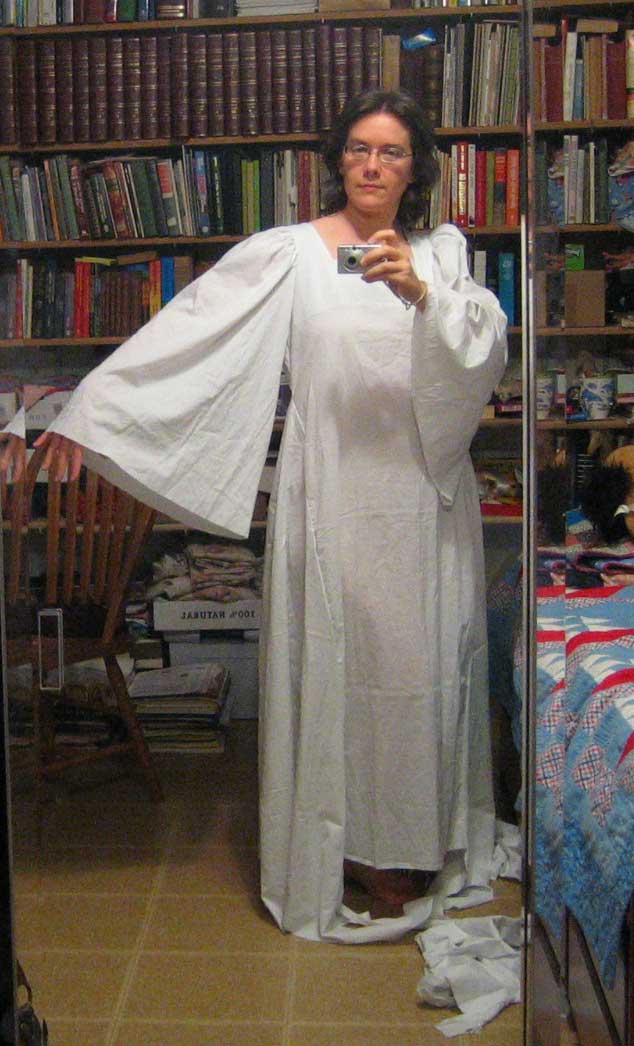 I actually like that a lot.  It's comfortable and feels very me.  The neckline is too wide and gaps a bit, but that won't be a problem under the next layer.  I'm pondering what to do with the sleeves.

The kids were confused about the hemline:  "What's that hanging down part supposed to be?"
No, no, don't worry, it'll be trimmed off even!

I'm snagged at the point where I decide what to make the jumper out of.  I was planning on the "gorgeous scales" fabric that I already posted about but it does seem a pity to use that for just a simple jumper.  It seems like fabric that gorgeous should be made into something even more gorgeously medievaloid.  It's been lying folded up on the sewing chair for a couple weeks while I give it further thought.

MUST get going though, must cut something out and make it into something!  Just cut!  Now!
(My standard anti-procrastination pep talk.)

Meanwhile, back to what Andrea wanted...

At an estate sale she spotted a chunk of heavenly-blue light woven $1/yd perfect for the underdress, and cut it out.  I ended up sewing it together.  It has raglan sleeves and a curved neckline about which the directions order with a straight face "fold over twice to form a casing"  ARGH. 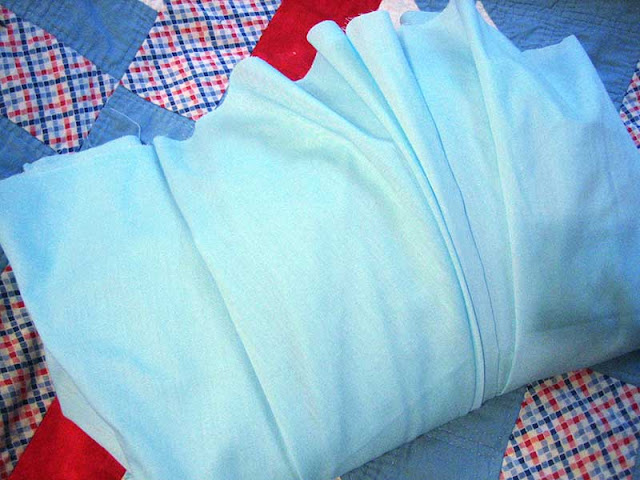 Had to do some wiggling with Photoshop to get the blue color to show up right.


The thrift shop had a perfect old tablecloth to use for the surcote. 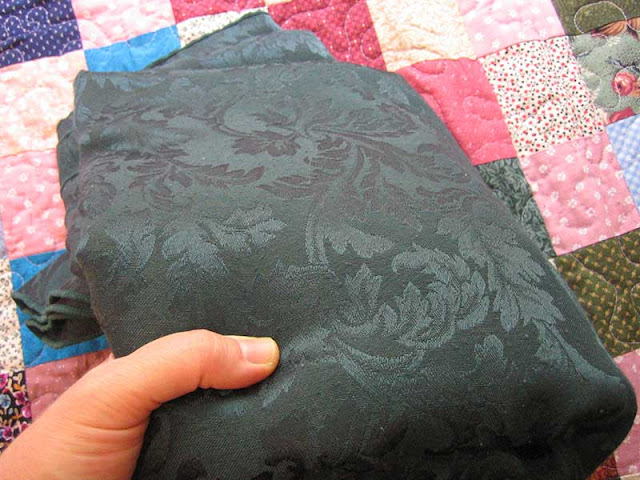