We have a plastic tree that we pull out every year, but it’s just not the same as the real thing.

The kids hauled out the Christmas junk in enthusiasm on November 20th this year, which ticked me off extremely.  They asked Daddy and Daddy said okay!

I snobbishly declined to help in the decorating process at all.   I figured the kids would make a royal mess of everything, and then I’d have the satisfaction of knowing they did it all wrong and somehow that would make me feel happy inside.  But… Karen was in charge of decorating and it came out like fairyland, really beautiful.  The plastic tree was a picture, and they had nice application of lights and symmetrical draping of garland around the living room.  They even got the garland over the doorways mostly even.  They did the downstairs too, and put the smaller plastic tree in the boys’ room.

So the whole house was decorated for Christmas for Thanksgiving.  Thanksgiving is the only holiday I really like and get enthusiastic about, and I don’t appreciate its being trespassed upon that way.

(I don’t mind New Years or Valentine’s Day, which may be pagan but at least aren’t masquerading as anything else, but there isn’t that much to do on those dates.)

Well… I ignored it and did my whole turkey feast and THANKS thing as well as I could.

After that it was okay.  I’ve said before, I admit the pagans had a valid point re lights.  In Northern parts it does get very dark and we may be tempted to panic that the sun will die and never come back again.  The lights do cheer our eyeballs up a bit.

On Dec 21 we all got some kind of foodborne illness thing, which caused me a great deal of interesting symptoms, but I’ll spare you having to skip through the description.  What with the lost sleep and the tummy pains and overall weakness and unhappiness, I suddenly HAD TO HAVE A REAL CHRISTMAS TREE.  I don’t know why that follows, but it just did.  I was too sick to tolerate that plastic mockery of a fake tree any more.   Ed said he wanted a nice fancy Christmas this year, and now I needed Christmas to smell like Christmas.

So I dragged my barely-mobile self into the van with a couple kids, a tarp, a rope and a saw.  There’s a place just up the road where I got a tree more than a dozen years ago, for only $20.  If they weren’t still a going concern, there was another place over the hill that I was sure was;  I had seen them when I drove by, harvesting the trees that would end up for sale at Walmart for $45.  I had a twenty in my pocket and was ready to bargain.

Well I stopped at the place just up the road first, and this is what I saw: 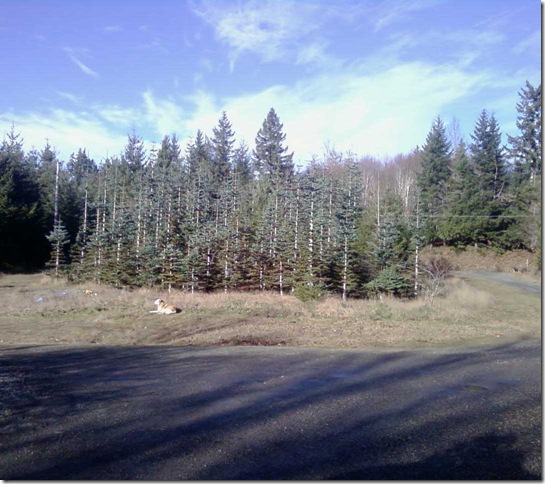 Hm, I’d say they’re not in business any more!  A guy came out of the house and told me the tree business had been his father’s thing and that was a long time ago.

I asked if I could have one of the little ones for $10, and he said Sure, he guessed so.  Or a top off one of the big ones would be okay too.  He had to go back in the house and take care of his grandson.

Those overgrown stalks are noble firs!

I didn’t have to behead one of the tall ones.  There was a little tree just a bit taller than me growing up almost in the roadway, a nice little noble fir though unsuitable for tree sales anyway because of the duplicate trunk that it had, and one really long branch sticking out.  Who cares, it’s fine for me.

I was SICK blast it, and not in the mood to saw, could barely manage it, but at the first cut of saw into tree trunk that SMELL filled the air, and Christmas aromatherapy kept me going.  The pagans have a point about the tannenbaum, too.

Watch me as I fling this tree on top of the van and then loop a rope around it.  Then drive home slowly, because that wasn’t exactly secure. 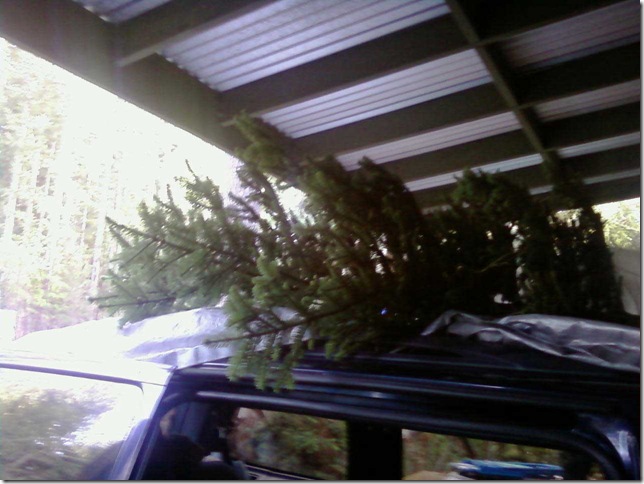 I was SICK blast it, but somebody’s got to get busy with a whisk broom getting all the forest debris off, shaking the needles and then lassoing it upstairs via the rope (I knew what would happen if I tried to bring it over the carpet on the stairs!) 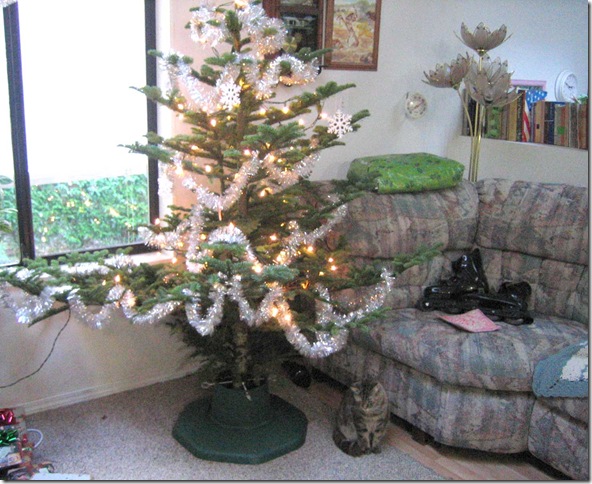 Of course I’m really posting this well into January, I’ve slid behind on everything!

Here it is January 6th and the tree is still up.  Everybody else has taken theirs down, but I have no intention.  That lovely sappy noble fir smell gets into my nose every time I walk up the stairs, and it’s not like it’s not still dark outside and we huddled in our caves don’t still need cheering!

I’m keeping it watered and it can stay until it turns orange!