Why No Pics from Wild Waves This Year?

Because I went down the waterslide!  For the first time in my LIFE!

I've been to Wild Waves with the kids two years previous.  Both times I'm the person with my clothes on, being a walking towel rack for the others.  That's okay and all.  But last year a desire was born to go down the waterslide myself.  So this year I talked Ed into going with us (to be the walking towel rack) and I went down the slide.

No pictures of this exist!  (which is a good thing)

This is the first one I went down, because it looked more gentle than the others: 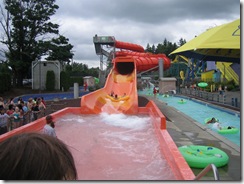 It turned out not to be the right choice.  That's a big wide slide with tubes designed for three or four people, which are supposed to spin around and around all the way down.  The boys went with me, and they flung some random little girl in with us to make four, and with three little people and one BIG, there's no spin!  The big lady gets to go down backwards.  Hmph.

Well, it was fun anyway!  So I grabbed a ring and headed for the other slide. 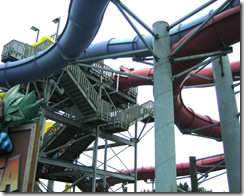 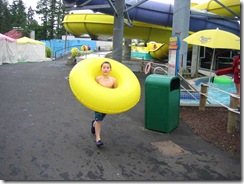 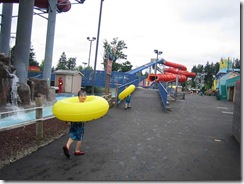 The first time up was really quick, the second and third times up took longer because the line was backed up halfway down the stairs.  Still, didn't take that long and was HUGE FUN and very worth it.  I went down the last time in a double tube with Dave.

Not that all of this was without conflict... Ed didn't want us to break up into groups, we had to stay all together.  Ed's the one with his clothes on this year, so that's that.  Mike started to get a bit impatient just waiting for the big slide over and over; he wanted to go to something ELSE.  I said TOUGH!!  I'm going down the big slide until I get tired of it, you can either go with me or stand by Daddy!   This is MOM DAY!

The green spiral slides the boys liked so well last year were closed down, but they eventually got to go on a new thing that was rather like a short playground slide only perched eight feet above a deep pool of water.  That was thrilling enough, I'd say.

Then we went to the dry section with the rides... still no pics, as it was doing the Washington thing on us and I didn't want to get the camera wet.  I suppose we all looked pretty funny walking around (the white ones of us being completely ghost white) shivering in the rain, having fun going down water slides.  Ed said he was in Nevada once long ago, when their water park was closed because it was only 80 and that wasn't considered warm enough.

This pic from last year makes me smile.  It's the kiddie coaster: Dave and Mike are amused, Andrea is being sarcastic, Karen is making a face at Andrea! 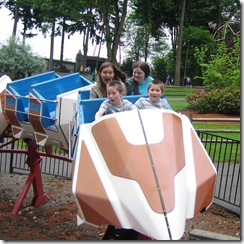 Andrea's idea of a coaster is the Timber Hawk, where you go rattling around a track at 60 mph.  Dave likes it too, Karen's about in between, Mike wants nothing to do with it! 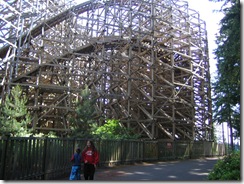 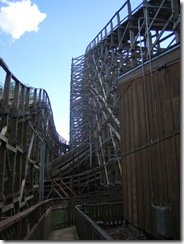 To my surprise, Ed said, "I paid to get in, that means I can go on stuff too, right?"  and hopped on the Timber Hawk.  That's the one I went on last year to prove I wasn't too old.  This year I feel no need to repeat since I'm only one year older than last year.

Ed seemed to like it!  Unfortunately no pics exist  :-)

Labels: stuff we did