It's not because I'm imagining it's someone's noggin.  It's not.  Don't know why people think of that when I say splitting's the most satisfying thing I know do to.
It's just the steel... the wood... the motion.
Anyway it's instinct, and responding to deep instincts always rocks.  Long about September or October, the warm smell of August turns into the crackle of dry leaves, and there's a lovely crispness in the air, not of cool but of going to get cold soon.  It's TIME to make a gigantic pile of wood near the house so we can stay warm all winter.
Anyway it's such fun to march down to the bus stop with a maul over my shoulder.
It's like, Crazy person; should we hide?
The privilege of hopping on the bus to the confusion of everyone was more than reward enough for a trip to my friend's house to split some wood for her, but she also gave me lunch and a few tools that she had extra.  That's as close as I've come yet to getting paid for doing what I love  :-) 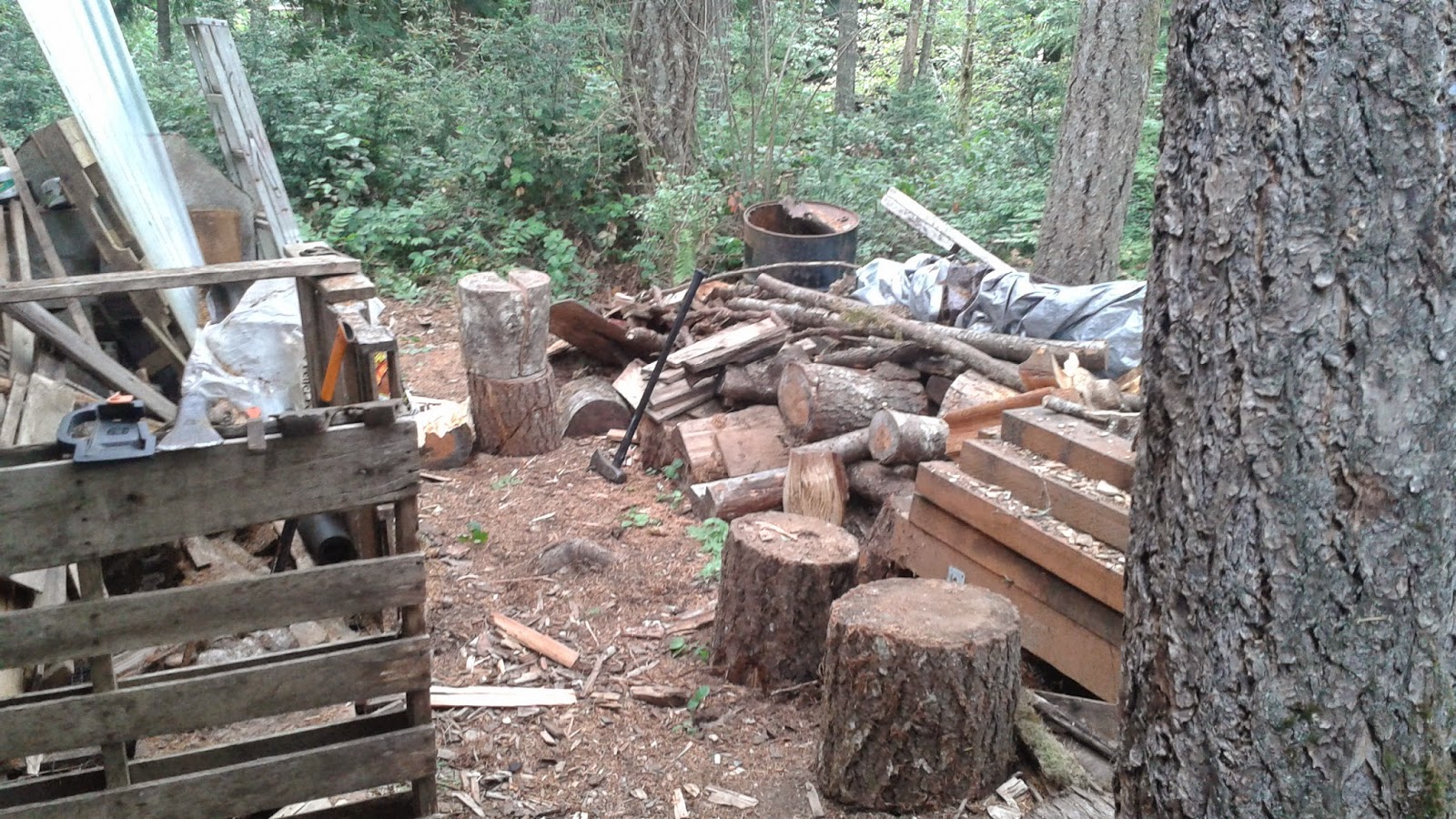 It was wood that someone had donated to her.  Why did they donate it?  I think it might be because they didn't want to split it themselves.
That means each round is a different, interesting challenge!! 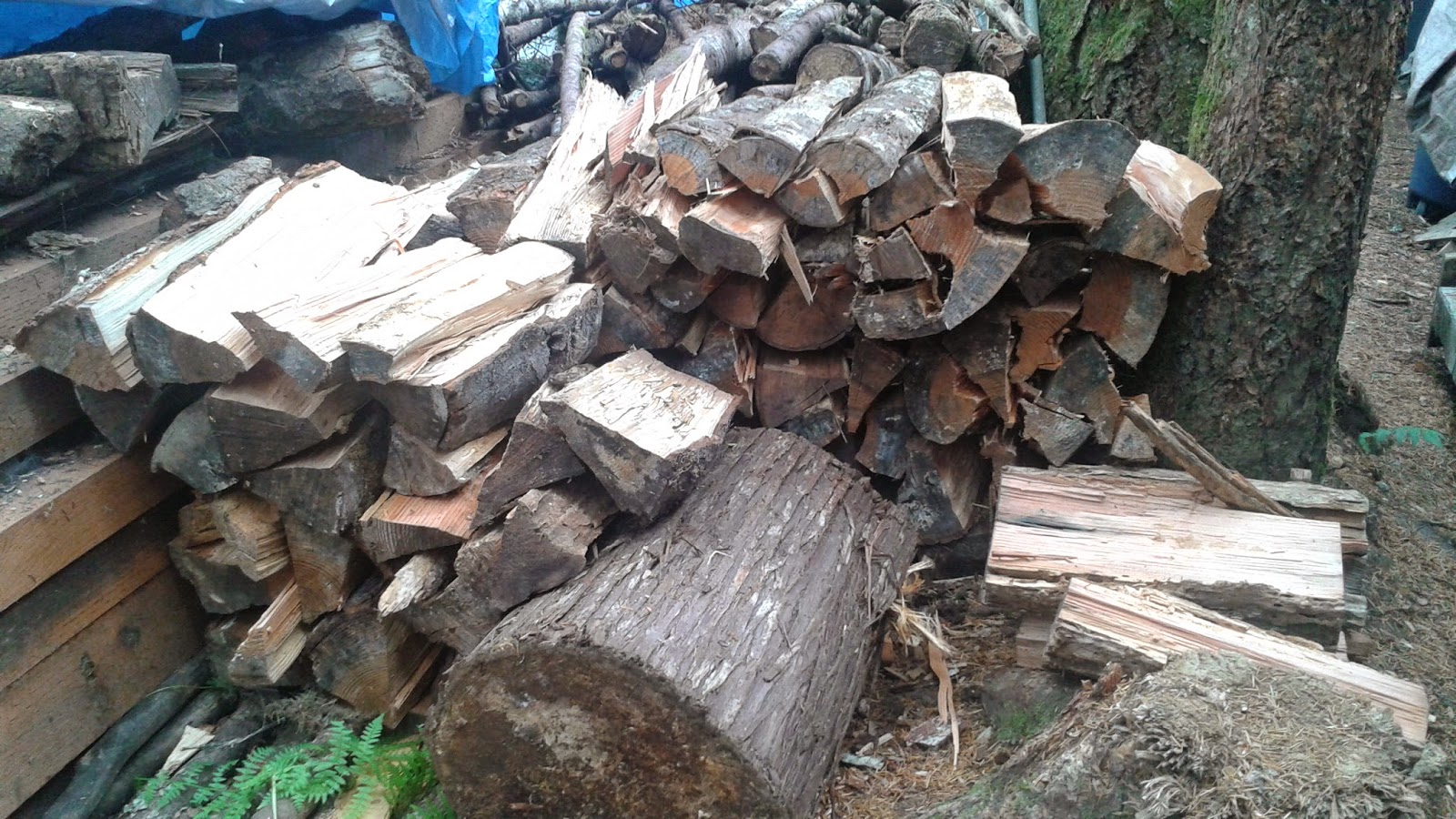 One round was so fibrous that I buried two wedges in it from each end, then used the super-sharp Fiskars axe that my friend had to cut through all the individual fibers that were still holding the halves together.  Silly! 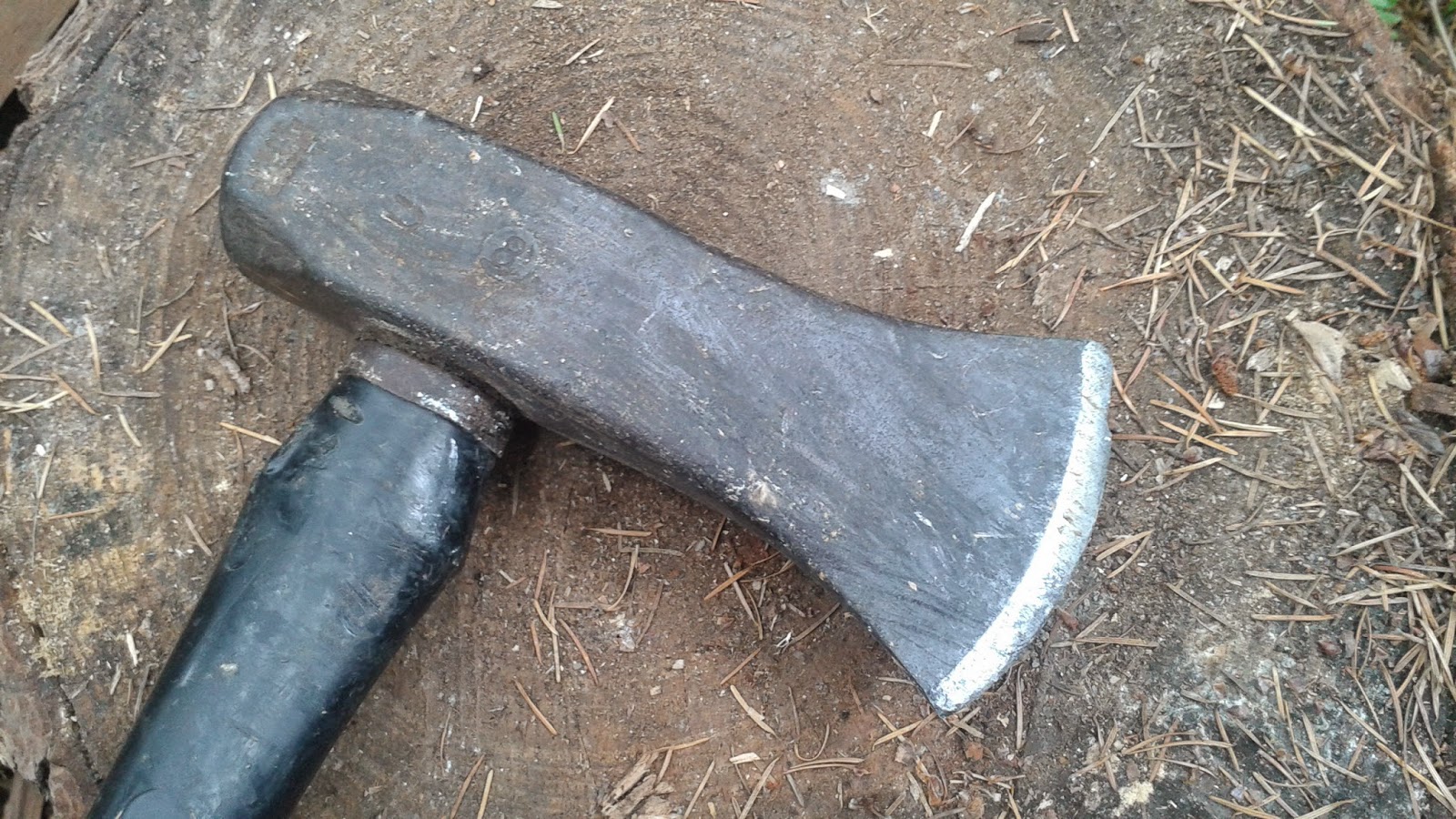 She gave me a file so I can finally put a new edge on the old maul.  Notice the top corner, still a little blurry?  Aeons ago I hit a rock and broke the corner clean off.  It's been filed so many times since then that it's almost blended in.
But when people tell me "you don't need a chopping block with a maul," um, no.

Let's have some nostalgia for the rounds that last logger left for me.  The one before him had dropped export timber then broke it, making it worth nothing but to be sawn into rounds for firewood.  The logger left it all for me because I'd said I liked splitting, instead of taking away half to resell like he usually does.
Most beautiful, big smooth rounds ever... that I had to leave behind.  Sigh.
"I wish he'd taken away the lot."

Oh, but see?  The blessing of Jehovah maketh rich, and he adds no sorrow with it!  :-)

I WAS going to sit in my upstairs apartment and watch the weather come on, but look what God brought to the woods right behind me! 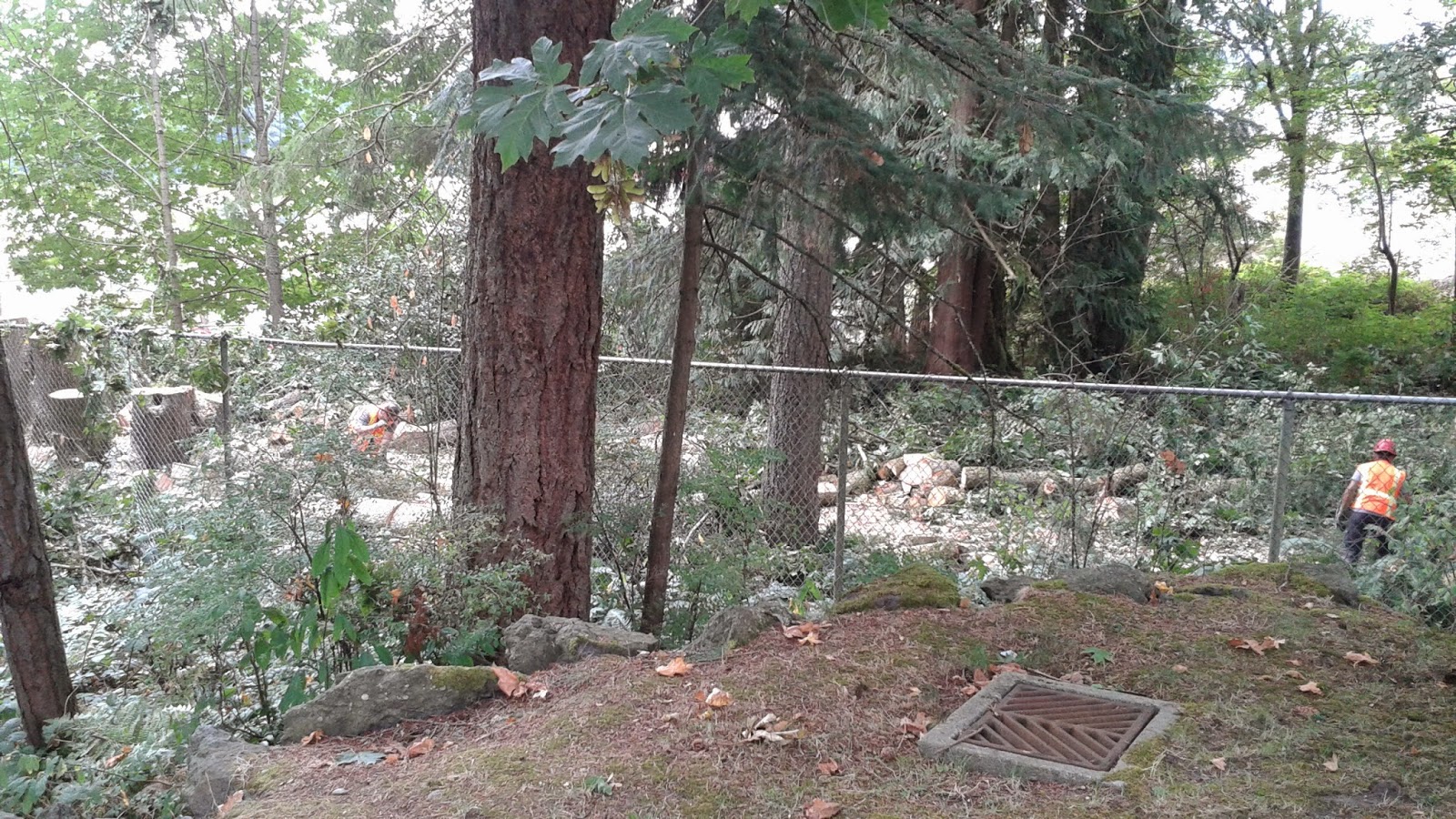 I was standing on my deck listening to the music of chain saws and ignoring it, until a tree dropped from the skyline as I watched.
Cool.
The cutters told me they were just going to leave the rounds, and someone from that side would gather them up.
Later I went over and split some of it just for fun, as a service to whomever it was who was going to take the wood home.
I don't split much at a time.  I used to like to go out every day and split a little, and now fancy this, a woodpile that I can leave from my front door and walk to, just like old times!

Three months later nobody had taken any of the wood I split. The rain started and the wood was left out in it.

Long ago a workman told me a story of a job he'd been on, to which he went back the next week, and the homeowner showed him a beautiful brand new $40 (90's price) hammer.  "Is this yours?" he wanted to know.  Because he had asked everybody else, and nobody had claimed it.  The guy telling me about this said he held that hammer in his hand for the longest time wondering what he could say that wouldn't be a lie.  He finally came up with, "You know what?  I think this does look like mine!" 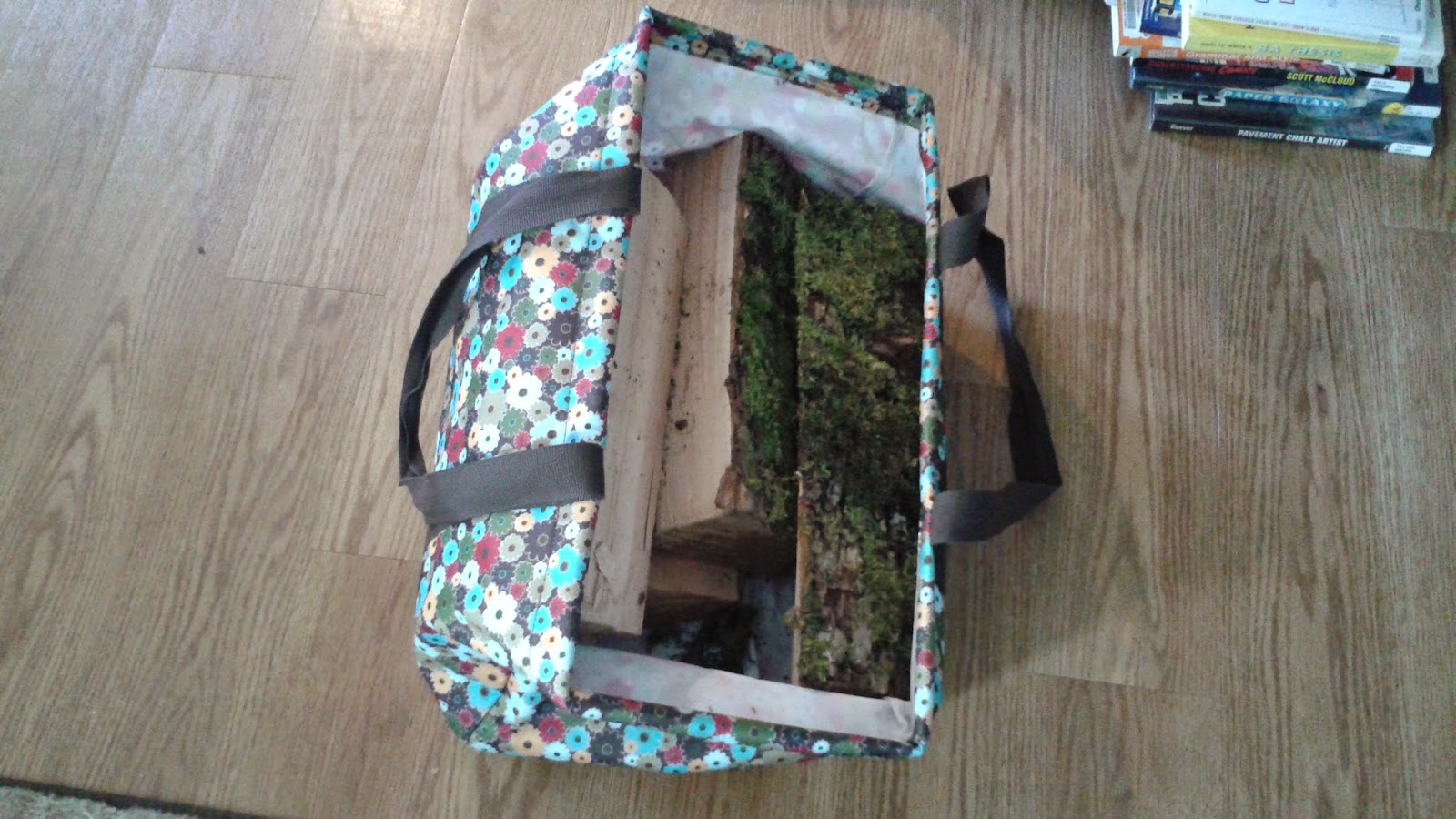 After they let all that firewood that I'd split lie out in the wet until it grew black mildew on the ends, and got bugs underneath, it started to look like mine.
I've been carrying it home in this beautifully feminine canvas bag. 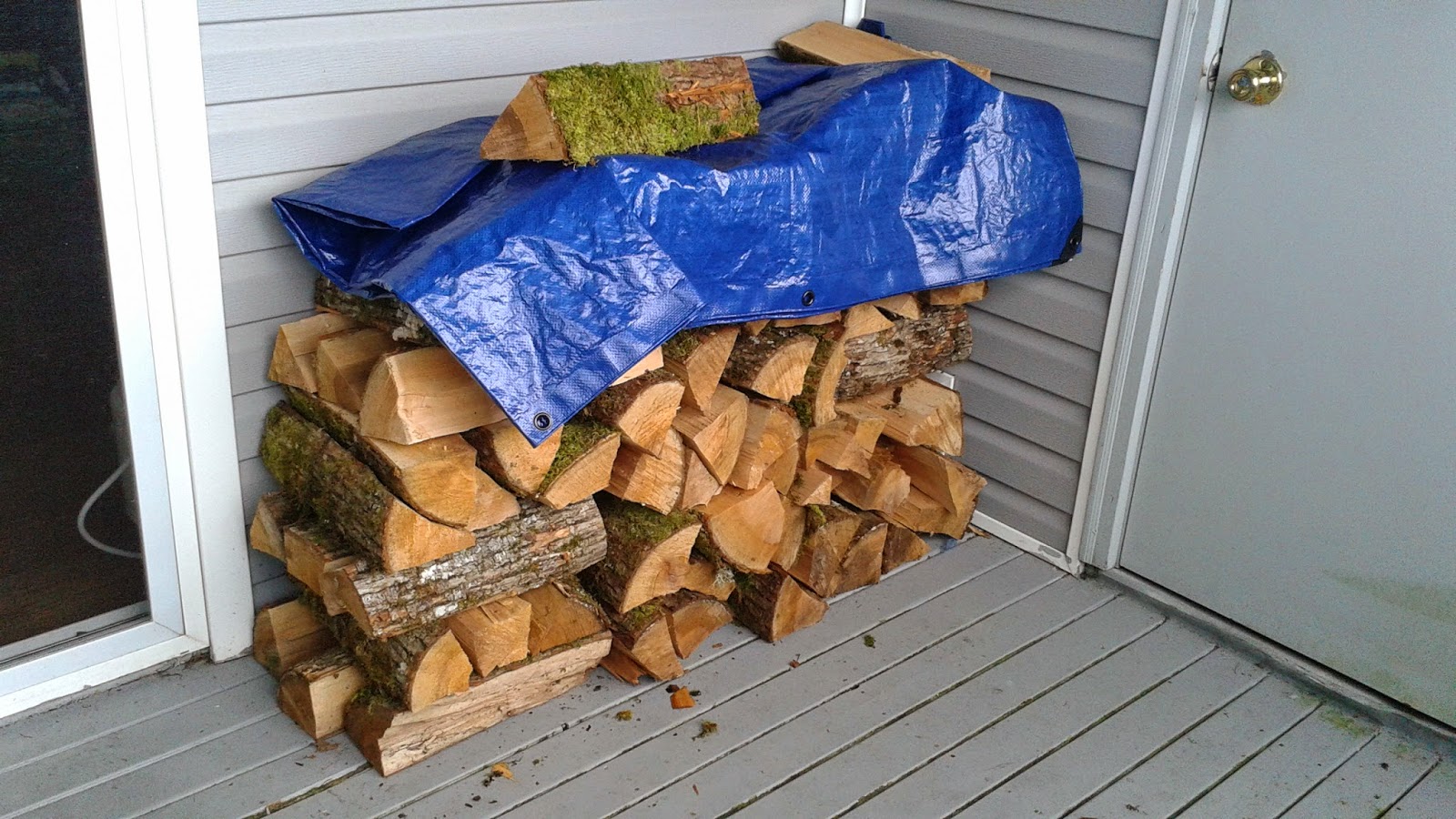 There's more than that by now.
And a ton of kindling. 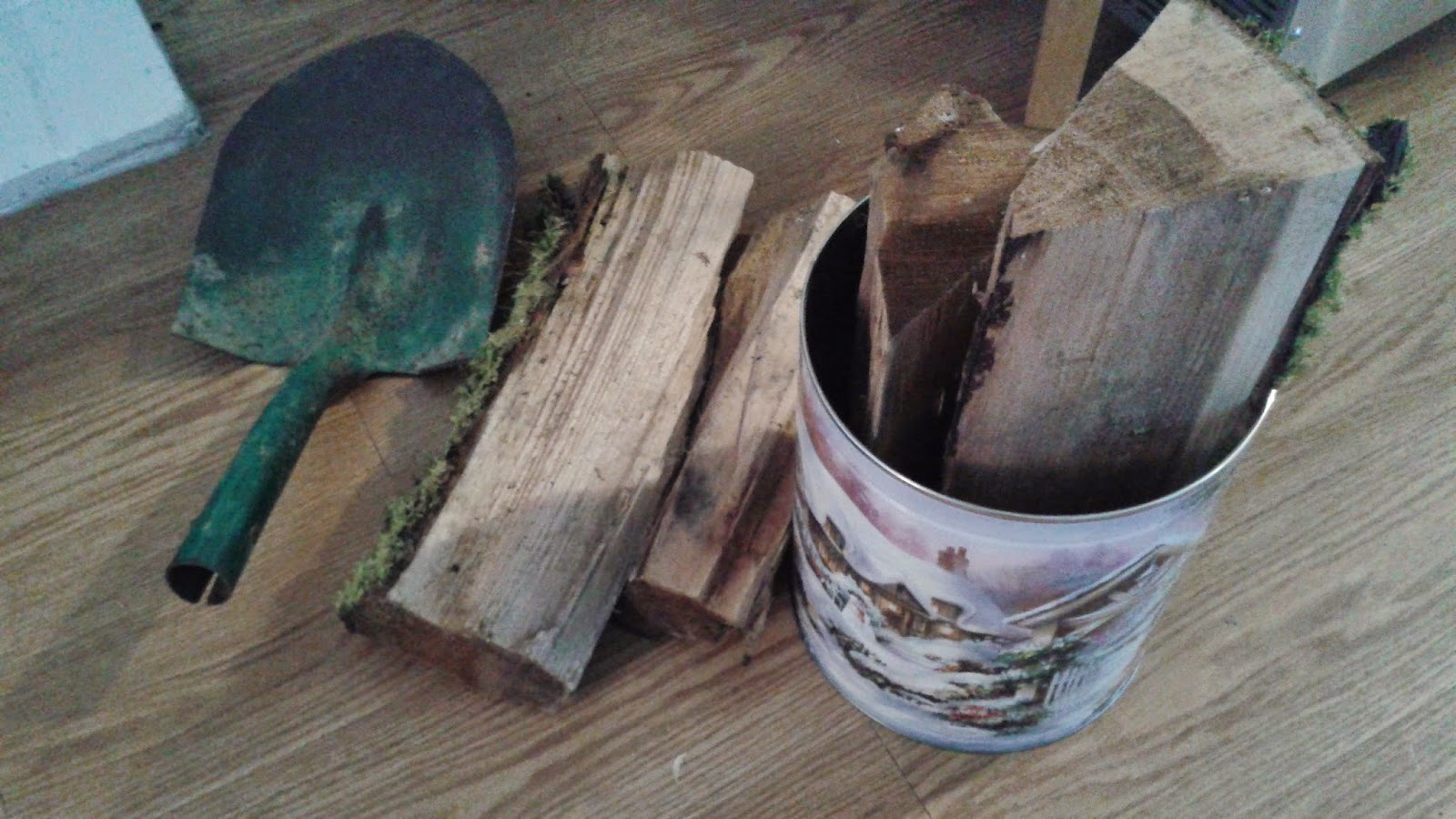 Gotta have SOMETHING made of steel, for a fireplace tool.  Shovel head from the Habitat store for $2, okay.
And what to do for a metal bucket??
Prettiest bucket ever  :-) 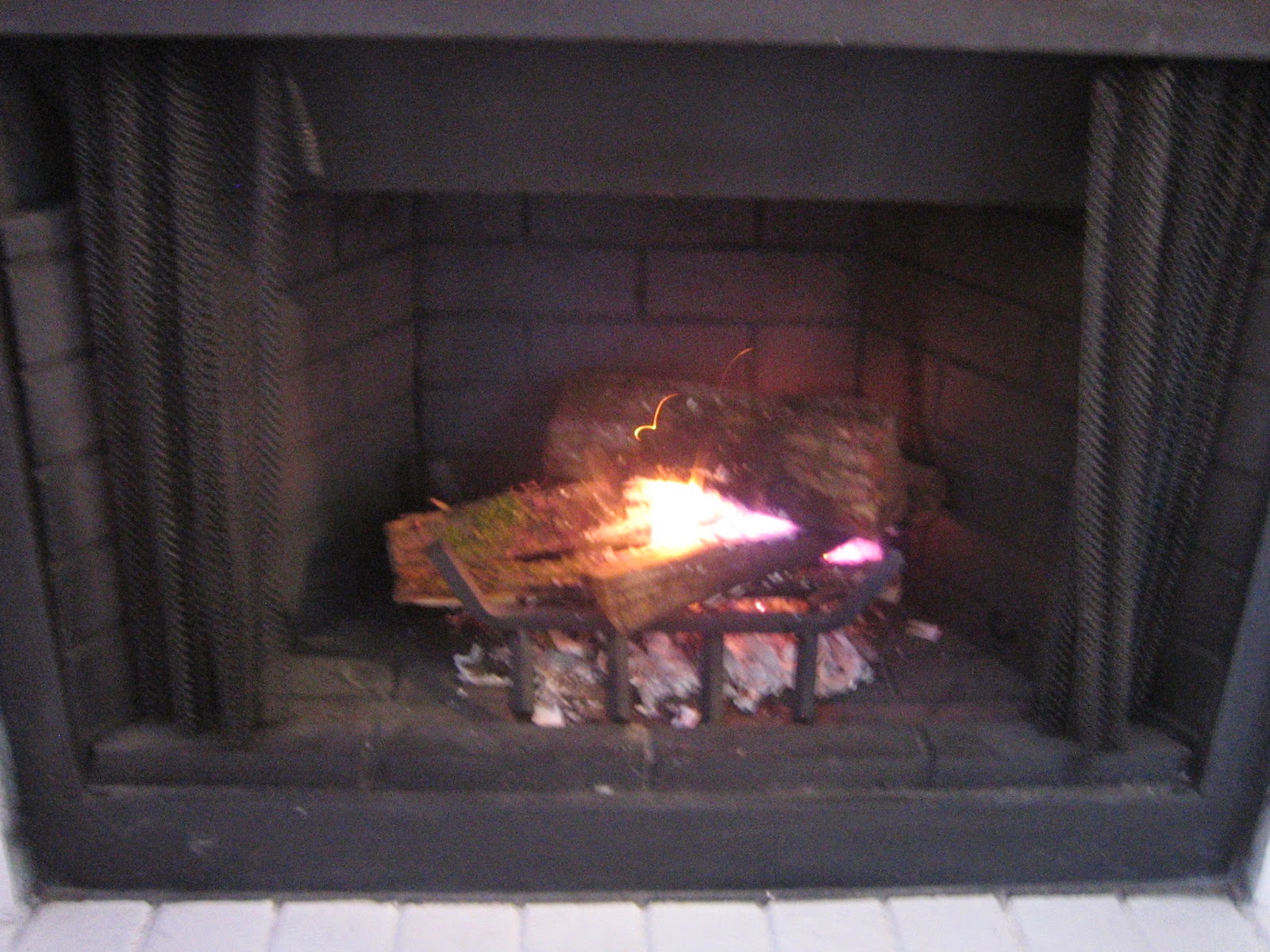 I'd never run an open fireplace before.  Inefficient, troublesome, and not putting out much heat after all, balances with "about as romantic as it's possible to get".  After getting it lit we just crouch there hypnotized by the flames. 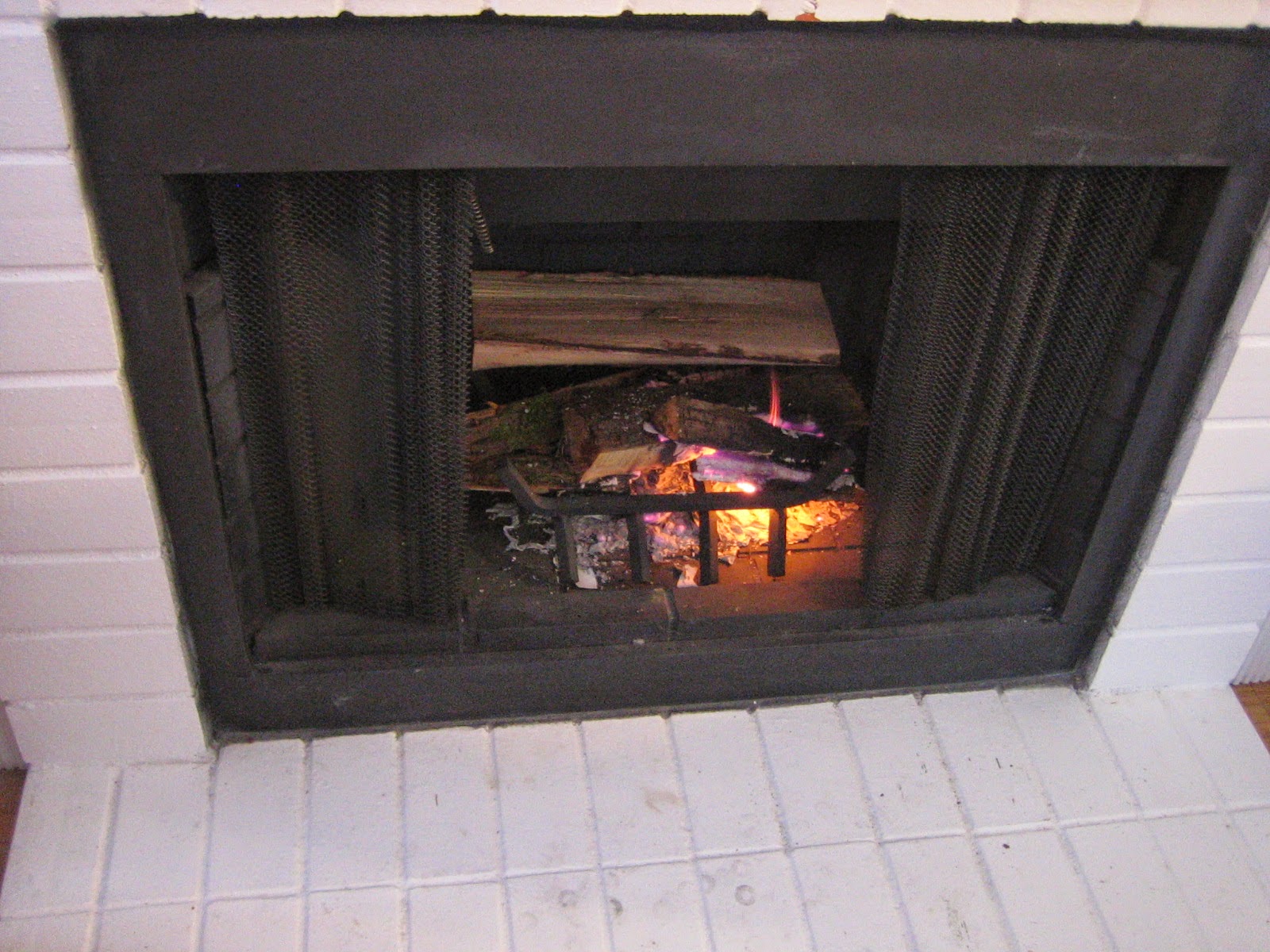 Not so hard to get something going.  I had a lot of dry kindling in the house.  But then I did what I always do-- as soon as there was a hopeful bit of flame, I threw a big piece of wet wood on top, jostled the lot and nearly put it out.
I spent some time gently blowing and nursing the flames back, and getting philosophical.
That's like me, isn't it?  Isn't that what I always do?  And the sad truth is, I'm just like that woodpile out there, wet, mossy, with bugs, so far from ideal that it's a joke.  With bad timing, too. 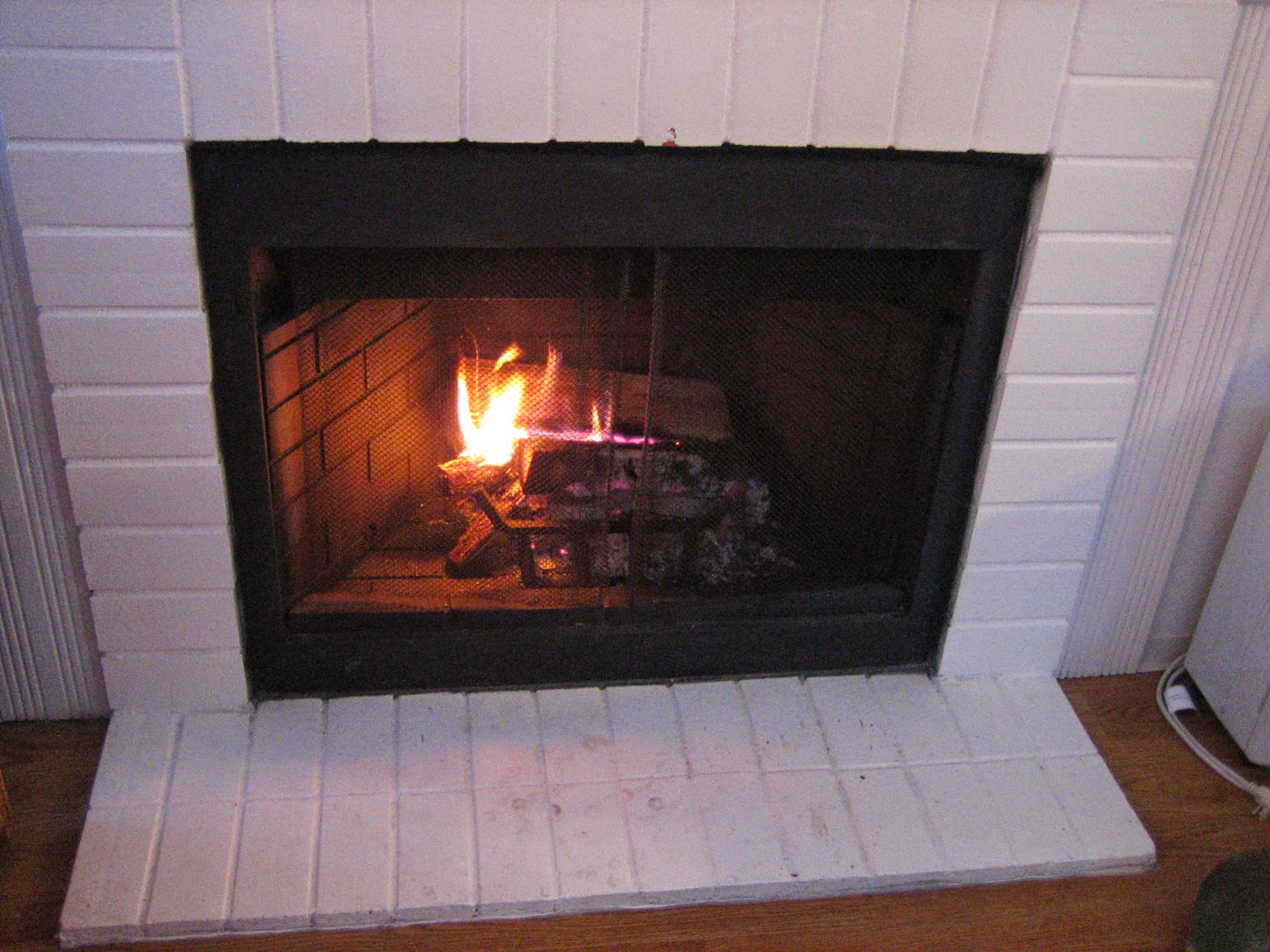 But, you know what the real truth is?
That pile's gonna burn.
It's gonna heat the house.