Since this is a scrap quilt for cuddliness and doesn't matter, I thought I'd try my amazing new free motion quilting skillz on it.

This was the very first try, smack in the middle of the quilt.  It took only a couple minutes and look how pretty it came out!
I had one goof-up that I had to restitch, and one broken thread.
Since taking the pictures I've done a bunch more sections with no goofs and no broken threads.  At this rate the whole thing will be done in no time.
It's easier than trying to crisscross the blocks or stitch in the ditch-- why?  Because without the machine presser foot, the layers move freely around and any scooting evens out instead of compounding as you get further.  Also, since there's just one area being worked on at a time,there's less muscling of that mass of rolled quilt around inside the machine! 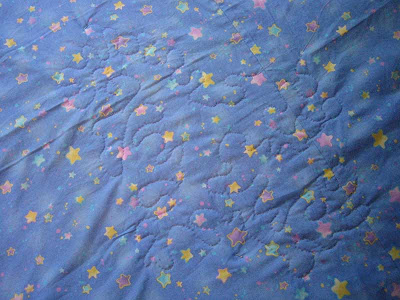 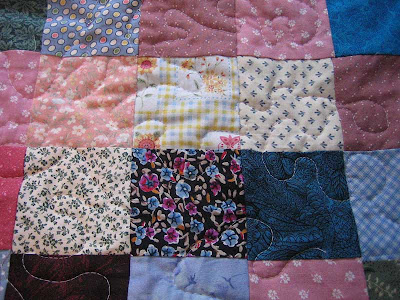