Yesterday being Sunday, I felt I couldn't sew on my Favorite Fabrics quilt-- since now that my bed desperately needs it since all the other quilts have fallen apart-- it falls under WORK!
So I started something new for fun :-)

I had a pile of 4" squares I've been accumulating. Some time previous I arranged some of them in groups of 4 and 5 coordinating to make blocks, and made them into a QAYG project using lighter tones for the backing and sashing... but then I ended up hating it and picked out the couple blocks I had made. Lighter color strips between blocks just didn't work. It'll have to be black or some strong tone.

I had this largish Mary Engelbreit piece that a friend gave me, with moons, sunflowers etc. It's a bit busy but dark enough to serve as the framing. I carved up the whole piece into backing pieces and got twenty of them. The last two had to be patched together, but I thought a 4 x 5 block quilt would be better than 3 x 6.

I asked Andrea to sort the squares into groups of 4 and 5 that go together harmoniously. Now I have all the sets together in little piles ready to go together.

I'm eager to get started on this!

The pics here show the blocks I had used last time and picked out. You can still see where the quilting was. 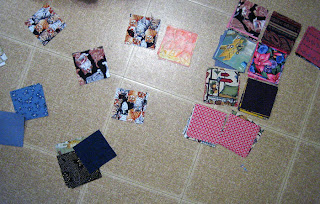 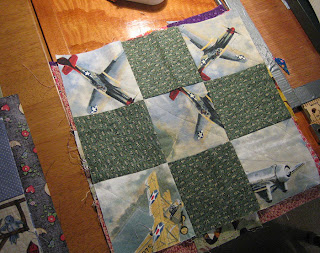 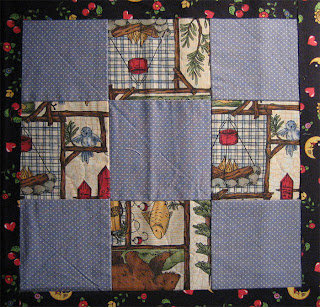 PS, I'm not having fun with Blogger right now. They wanted me to try the new interface, so I did, but it's obviously not optimized for those poor losers who still have dialup, so I switched back. But they switched me back to a version older than I'd had before, where I can't even resize the pictures.
So I updated again, hoping to just live with it...
But with the new version, I hit "Publish" and nothing happens! (And it doesn't publish)
I tried "Save" and finally "Close" and it told me I had unsaved changes...
I tried reporting the problem, filled out the feedback form and it says "Oops! Something went wrong!" So even the feedback form to report my error is malfunctioning!
Well, I'm back in the ancient version, let's see if this at least publishes. The pics aren't the way I wanted them and I can't figure out how to make them larger in the code. Phooey.
Posted by Janel at 12:45 PM