Seattle Doesn’t Get That Much Rain

Seattle Doesn't Get That Much Rain 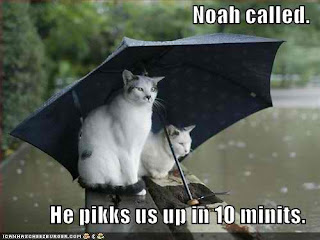 Today I found out that Seattle doesn't really get that much rain compared to most U.S. cities. In fact, Seattle ranks 44th among major U.S. cities in average annual rainfall, getting approximately 38 inches annually. Cities that get more rainfall than Seattle include such as Houston Texas (48 inches), New Orleans (60 inches), Mobile AL (65 inches), Memphis (52 inches), Nashville (48 inches), and pretty much every major city on the eastern seaboard, such as New York (43 inches), Philadelphia (41 inches), Miami (58 inches), and Boston (44 inches).

So why does everyone not from Seattle think to go outside in Seattle without an umbrella is tantamount to committing suicide? Partially because of the entertainment industry producing things like Sleepless in Seattle, Frasier, and the like which portray it as such. (Along with always showing a Seattle skyline where somehow the space needle is by far the tallest thing in Seattle. Even though the Space Needle is actually about average in height compared to the 25 or so skyscrapers in Seattle; coming in at about 600 feet including the needle. With Seattle possessing quite a few skyscrapers around the same height and 6 skyscrapers taller than it; including the Columbia Center at 937 feet, which has more floors, 76, than any building in the U.S. west of the Mississippi River and is the 20th tallest building in the United States).

But the primary root of this rainy misconception really lies in that Seattle has a relatively high amount of days per year with precipitation (158), compared to such places as New York (119), Boston (127), and Nashville (119). All cities that get an average of about 16% more rain per year than Seattle, but also average between them about 36 less days a year of precipitation. So it rains a lot less in Seattle, but is spread out over about a month more of days than those cities. This is why almost no native Seattle-ite carries an umbrella generally. When it does rain, it tends to be a very light drizzle that isn't bothersome. It almost never really "rains" as most people from places like Alabama, Boston, or the like think of rain. On top of that, it never really storms in Seattle either. Seattle gets an average of a mere seven days a year where thunder is heard, for instance. 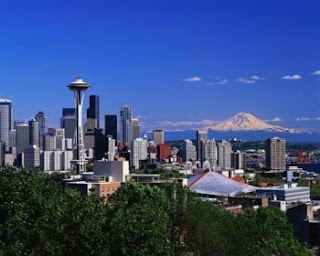 Another contributing factor is that Seattle doesn't have a very uniform distribution of cloudy or rainy days from month to month like Boston, New York, and many other major U.S. cities have. As a rule, it pretty much is cloudy with occasional light drizzles from October through March in Seattle. Then from April through September, Seattle gets almost no rain and from June through September almost no cloudy days. Makes for a very nice climate if you don't like large changes in weather. Around 45 degrees Fahrenheit and cloudy in the winter, with only an average of 8 light snow days, and around 75 degrees Fahrenheit and sunny in the summer.

So how does this city that is right next to the Puget Sound and relatively close to the Pacific Ocean manage to have such a mild climate and get so little rainfall, yet have so many more cloudy days than places like New York and Boston? Seattle-Tacoma (Tacoma being a neighboring city that most rain estimates include in estimating Seattle's annual rainfall) is protected by the Olympic Mountains where the Olympic National Rain Forrest is located. The Olympic mountains and rain forrest, about 80 miles to the west of Seattle on the Olympic Peninsula, gets a staggering 142 inches a year of rain coming off the Pacific Ocean. This trims off most of the precipitation coming from the ocean before it gets to Seattle. On the other side, Seattle's climate is protected from arctic air by the Cascade Range which is a major mountain range East of Seattle extending from Washington down to Northern California.

So in short, if you like sunny not too hot summers, mild winters but with lots of cloudy days, and ridiculously beautiful scenery everywhere you turn, Seattle's the place to be. If you like more evenly distributed cloudy vs sunny days throughout the year and hate nature, then not so much. Either way, if you visit Seattle, don't bring an umbrella. People will look at you funny. Unless you want to visit the Rain Forrest; then definitely bring an umbrella, strong bug spray, and try not to get lost; the animals will eat you.

Got this from Wikipedia: 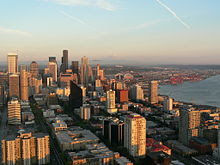 Downtown Seattle averages 71 clear (sunny) days a year, with most of those days occurring between May and September[65]
Seattle's climate is usually described as Oceanic or Marine west coast, with fairly mild, wet winters and very warm, dry summers. Like much of the Pacific Northwest, according to the Köppen climate classification it falls within a cool, dry-summer subtropical zone (Csb), with 'cool'-summer Mediterranean characteristics.[66] Other climate classification systems, such as Trewartha, place it firmly in the Oceanic zone (Do).[67]
At 944mm (37.17 in.), in reality, the city receives less precipitation annually than New York City (1201 mm, 47.28 in.), Atlanta (1290 mm, 50.79 in.), Boston (1055 mm, 41.53 in.), Baltimore (1038 mm, 40.87 in.), Portland, Maine (1128 mm, 44.41 in.), Jacksonville, Florida (1304 mm, 51.34 in.), and most cities on the Eastern Seaboard of the U.S. Seattle was also not listed in a study that revealed the 10 rainiest cities in the continental United States. This is due largely to Seattle's dry summers, which result in statistically moderate annual accumulations. Seattle receives the largest amount of rainfall of any major (pop > 250,000) U.S. city in November, and is in the top 10 through Winter, but is in the lower half of all cities June–September. Thunderstorms are rare. Seattle reports thunder on just seven days per year[70] For comparison, Fort Myers, Florida reports thunder on 93 days per year Kansas City 52, and New York City 25.

Between October and May, Seattle is mostly or partly cloudy six out of every seven days[65]
Posted by Janel