It was one of those days, you know the kind. Bothersome things that had to be done, nothing too awful, just a pileup of minor annoyances. I had to make a long transmission-related journey in the rain and hail-- made quite a bit better by one of the cheerfuller of the Brandenberg concerti coming on the radio-- that, and the happy expectation of going through a salad bar at some point in the day!

I found a pizza place near my destination and kept my hopes fixed on it like the distant star in the twilight. That was going to be the UP in the middle of the hail and the transmission. Then I picked up DH and found that although his plans did involve stopping for lunch somewhere, a pizza place wasn't what he had in mind.

He said we'd just take off back towards home and see where we ended up. I knew that left to himself he'd end up somewhere Chinese, so I made some phone calls while driving and found that the QFC next to the Safeway whose location I happened to know might have a salad bar.

First we went to the Safeway because he missed the "QFC next to the" part, and got all comfortably parked and didn't see why QFC's food would be any different from Safeway. I was gonna have to be sad if we didn't go to QFC! Then inside QFC I saw a bar in the distance, but it turned out to be an olive bar. A what??!

It was too late by then. DH ordered a roast beef sandwich and started eating it, while I wandered disconsolately up and down every single aisle in the store waiting for something to look good. I eventually got a cup of yogurt and sat down.

DH handed the last 1/4 of his sandwich to me. I pulled off the bread and roast beef and ate the lettuce, tomato and avocado. He said, "You just did that to amuse me, didn't you?"

No, I did it because I wanted a salad bar.

After that he decided we just had to go to the hardware store. THAT I happened to KNOW was right past a Top Foods where they have this EPIC salad bar that I just love. It's by the pound unfortunately, but I've gotten to be an expert at making a $4 salad.

I said I wanted to go by Top Foods, but he was all on about Costco and dinnertime and I don't know what all and he DROVE RIGHT BY the Top Foods exit. Then I started thinking seriously about crying. I do not care about dinnertime! Don't care what the kids want to eat! Do not want lamb chops! I just want what I want when I want it, is that too much to ask?

And then inspiration struck. "Blue cheese dressing" doesn't only come in jars. Buy some blue cheese and make it your own self! 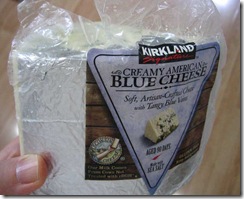 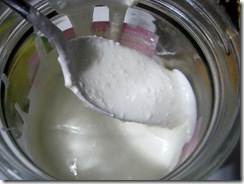 Tiny little chunk from Denmark for $4, or gigantic block from Costco for $4. There's various recipes on the internet, but the bottom line is blue cheese + mayo + sour cream + milk to consistency + blend. I can do that. 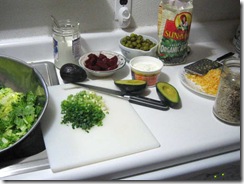 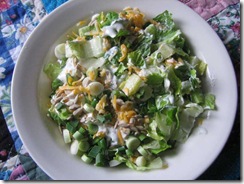 I didn't just want a salad, I wanted a salad bar, and finally I got one, with everything I wanted on it, and there was happies in every bite :-)

Andrea said, "You're taking a picture of your plate to post it on your blog?"