So I'm not a thread expert yet! On the way to pick up the Pfaff I stopped at a little thrift shop and found some old thread on those charming wooden spools (the lady told me most people wanted those for the spools, for making crafts)
I like old stuff! This looked like nice thread, Necchi brand made in Italy back in the day. Everything was half off, so I got all this for $6.50! 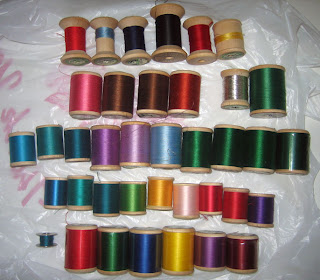 Went to Pfaff store to pick up the (I want to say "baby", but let's not be that silly) and told the guy about the thread I'd just bought and he said... "Sewing thread has a shelf life, you know! Old thread gets brittle and breaks easily!"
Argh. I think he's into raining on my parade!
And he's right, that old thread does break easily. Pity. Well I have a whole pile of nice wooden spools now...
I was going to buy quite a bit of their thread, (had already compared on internet, and the Pfaff store was actually cheapest!) but they were still out of basic black and white. I got a spool of very light grey, one of dark brown, and one rose pink. Close enough to "basics" for now. 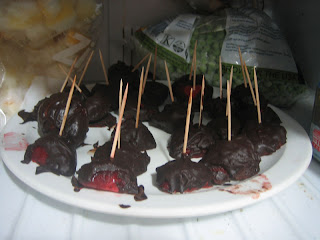 Came home and found my daughters have been dipping strawberries in chocolate, and here's some in the freezer waiting for me.

At the collage-making class there was a big tin of neat old buttons that we could use. I spotted these and just had to ask for them! Not for a collage, just because they were too cool not to take home. Check out the fasces!  It's a "Fascist button", how could I not want that!   Hehe, not really, read about it
And I love ladybug jewelry even though I don't own any! I had these darling red ladybug earrings that my daughters said they didn't want, and I always wore them until one day they took them back again :-( 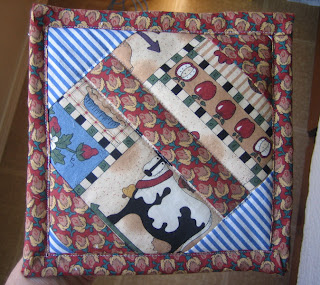 Finished another potholder to match the others, made on the Singer! 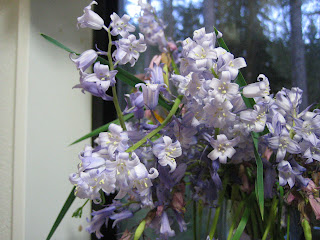 Was my wallpaper for a while. I like the authenticity of wildflowers, and the reality of some withered ones in back. Reminds me of some old masters paintings, remember the ones I mean? Some of the most beautiful still lives of flowers and fruit have dead flowers and rotten fruit in the picture, because that's how it really is...
Posted by Janel