My poor Pfaff, and the rest of my stable

The other morning I started sewing as usual, only it made a faint squealing noise every time it started. I was worried about that, and my daughter came in the room and wanted to know "what's that strange smell?" and decided it was coming from the machine. Wha...??
My beautiful Pfaff!!
I hadn't had it serviced when I got it because I couldn't afford the $80, but I could do $80 now, and just hope it's not something else going haywire in there! I hauled it over to the Pfaff store.
And how very HOT I felt carrying my Pfaff into the Pfaff store!!
The lady asked when it was serviced last, and I told her the story. She asked if family had given it to me? Surely not a stranger? And I said a stranger had. She said that was interesting because she was trying to reconcile herself to giving a Pfaff away, a very nice high-end machine that a lady who was going into a nursing home had wanted to donate to someone who would appreciate it. This lady (the one who ran the shop) had immediately thought of a mother of five kids who currently sewed her kids' clothes on an old Kenmore that only did zigzag. I said, "I have five kids too!" and she felt that was definitely a significant coincidence. Her husband came to look at my machine and she told him about it. So I think some lucky mother of five is about to get a really nice machine partly because of me :-)
Anyway, back to me. The man started looking at my machine. He wanted to know if that was really a Singer needle in there? I said I thought my daughter had done that (it's possible it was my daughter, it's also possible it was me) and he said sternly that we must not use Singer needles in a Pfaff, it'll wear away the something something, and ruin the threader, too! Yikes. Then he asked if I wasn't really using Coats and Clarks thread in this machine?? And I had to admit sheepishly that that was the case. No, no, they said, Coats and Clarks is made in Mexico and it's junk! The thickness varies, and it has little knots and snags, and it'll ruin the tension. I simply MUST buy the quality German thread from them! They said it'll be cheaper in the long run, because I'll be getting it serviced less often.
(Actually it's cheaper right now, or at least not any more expensive, because the nice thread is $7 a spool, but there's 1000 yards on a spool... C&C is only 300 yards!)
Then he asked me if that was me who had written all over it! Yes, that was me. I always use permanent marker to make a note about which way the bobbin goes in, so I don't forget and do it backwards. I said, "Don't tell me that can hurt it somehow!"
He said, "Well, you never know, this is a German machine, maybe it doesn't want you writing all over it in English!"
Hahaha, yes he was teasing that time!
They said they hoped I didn't mind.
I don't mind.
I can come pick it up in a couple weeks. So it's back to my old machine for a while. Here we are: 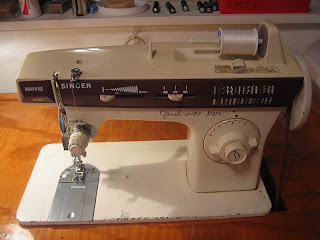 I bought this machine when I was first married and didn't know better. Visible on left, the famous rubber bands. It didn't have a foot pressure adjustment, and the foot was pressing so hard it was basically impossible to sew with. For a long time I thought I was doing something wrong! I resorted to holding the material in front and back and pulling to keep the layers feeding evenly. One day I ripped out the spring and strung rubber bands in there instead. Now it doesn't press down very hard at all, and I've still got to use my hands on both sides, but too little pressure's a lot easier to deal with than too much! The rubber bands break from time to time, and I replace them.
It's still a huge improvement over sewing by hand!
I have two other machines. A good friend gave me a lovely Singer made in the Fifties-- "Fifties" gets capitalized, don't you think? The Fifties must've been a great time, to hear everybody talk about it. It was after the war, and everybody's rich and happy and wearing huge skirts, and having lots of babies. And that Fifties Singer was a wonderful machine, a pleasure to sew with, but the motor burned out with smoke and everything. It happened when I had zero money, so I just set it aside and went back to the old machine. I also have a White that I paid $25 for, and it's kind of okay... it's decent, sorta. It's so clunky! It's very noisy, and I don't know what's wrong with the feed dogs, they just kind of go all astray. It works great on blue jeans, big heavy jobs and such, but it ruins anything more delicate.
I have a certain affection for my rubber-band machine. Any time you invest something of yourself it's hard to hate it later!
And, you'll notice, my rubberband Singer has an external belt? I hooked it up to my treadle base and it works dandy. When the power goes off and the computer goes dark, I can sew :-) 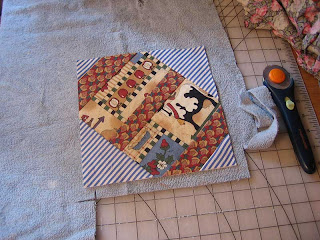 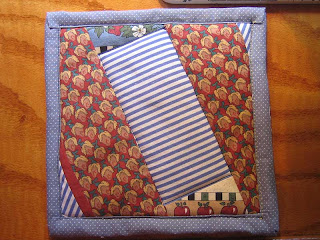 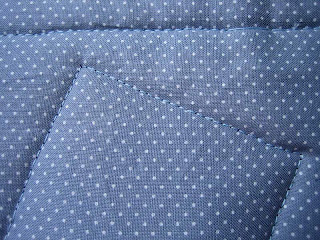 I just made that with it.
Check out the top right where it skipped three stitches in a row, and the lower left, alternating long and short! I think I'll do more ordinary sewing in the meantime and let the next potholder wait until the Pfaff comes back.
Posted by Janel at 9:40 AM