They just called to say my Pfaff is done. It was very dry and needed lubrication badly, that's why it was making the noise and odd smell. I asked what he would guess the history was. I had rather wondered if I was the first person to sew on it... that was my impression because after sewing a while, I noticed lint in places there hadn't been lint before. He said that made sense, because he found it very dry and dirty in an unusual way, as if it had been stored for a long time in a dusty place. Sewing machines that were being used regularly didn't look like that inside.
I think I can pick it up today! I'm going to buy some of the thread, too. Just a couple spools of white for now... I'll have to use up that "junk" Coats and Clarks thread in the other machine, I guess!

Look at the cool $1/yd fabric I just found on the discount table. That's prettier than cheap fabric normally is! And it came out of the dryer beautifully smooth and ready to go. There was a little more than five yards of each! 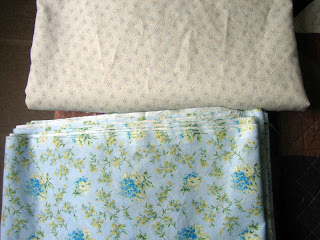