The Clock is Back on the Wall 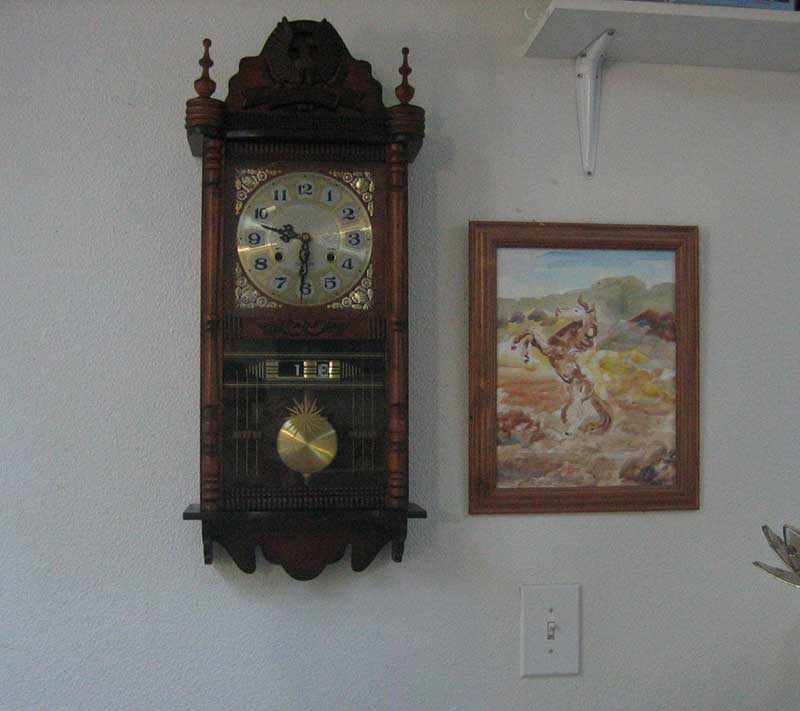 This is the clock we inherited from DH's mother.  I liked it for a lot of years and then it stopped winding.  I took it to the clock place and the guy in there wanted $50 to fix it.  I got cheap and brought it home, I was gonna fix it myself.  He explained how to fix and gave me some tips.  I got as far as taking the whole thing apart.

Then it lay on the floor under the shoe rack for the next I don't know how many years (quite a few) gathering dust and pine needles.

Last week I was having such fun making a list and checking things off it!  Even writing down the most ordinary things and then checking them off, makes one feel as if one has majorly accomplished things by the end of the day.  In this mood of efficiency, I spotted that clock, and gathered it up and took it down to the clock place.

I was resigned to having to pay more than that by now, the economy having started its downward spiraling motion in the meantime, but I do admit I'm not going to learn clock repair in the forseeable future.

The clock place guy was standing right there amidst the shiny beautiful clocks, I put my apart-clock on the counter and he fixed it with his fingers and proceeded to reassemble it while I held parts in place, and he charged me $20 for this.

Happy camper has the clock back in business.  I really love that clock!  I like that nice mellow chiming every hour and half hour.  It reminds us of the progress of time.