Karen's Latest, and My Organized Mike

I always believed in nature over nurture, based on my reading and personal opinions.  What would I say, maybe 75% nature and 25% nurture?
Since being a mother I'm gonna go with 95% nature.
They are BORN the way they are going to be, nothing else to it!  What about Karen's amazing artistic talent?  Sure, there is a good supply of ordinary-creativity and artistic skills in my family, in that when we do a project, we can make it come out looking nice.  That does not explain Karen.  Click the "Karen" tag to see more if you haven't been following  :-)
When this daughter was three, while the other kids were still scribbling, she'd divide up her kiddie coloring pages into mosaic patterns to make them more complex, and then shade them.

She's been unhappy with the inside of our house for a while now.  She didn't have a place set aside for painting, there just isn't enough room for it.
(I feel SO SO SO guilty for having a sewing area set up, and every time the Karen painting space subject came up, I'd start talking out loud about whether I shouldn't be a good mother and sacrifice my sewing area for a painting area.  Then one day Karen said, "Did I ever ASK you to give up your sewing area?"  It's not by a window, so it wouldn't work anyway  :-)
The summer's mostly over, but she finally thought about setting her easel up on the deck, and she's been working out there for a while which is really good to see.
Here's what she came up with-- 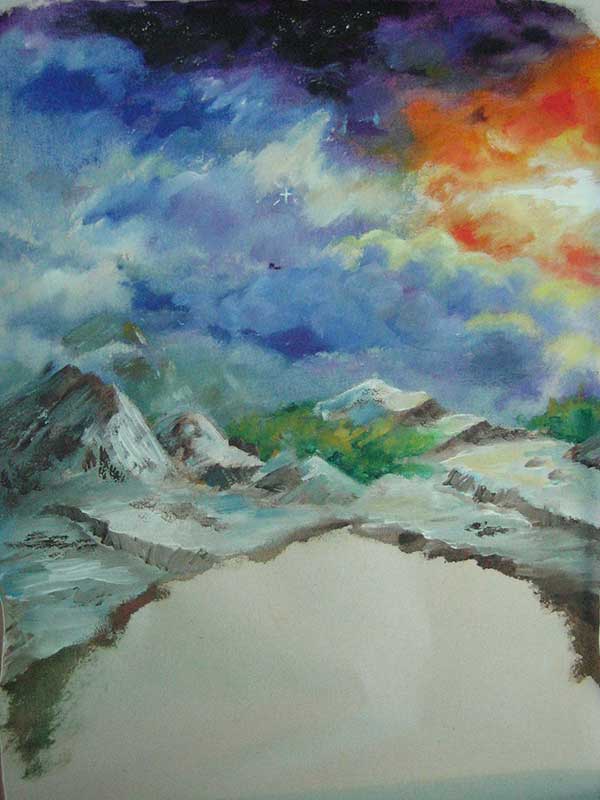 She hasn't decided yet what should be in the foreground  :-) 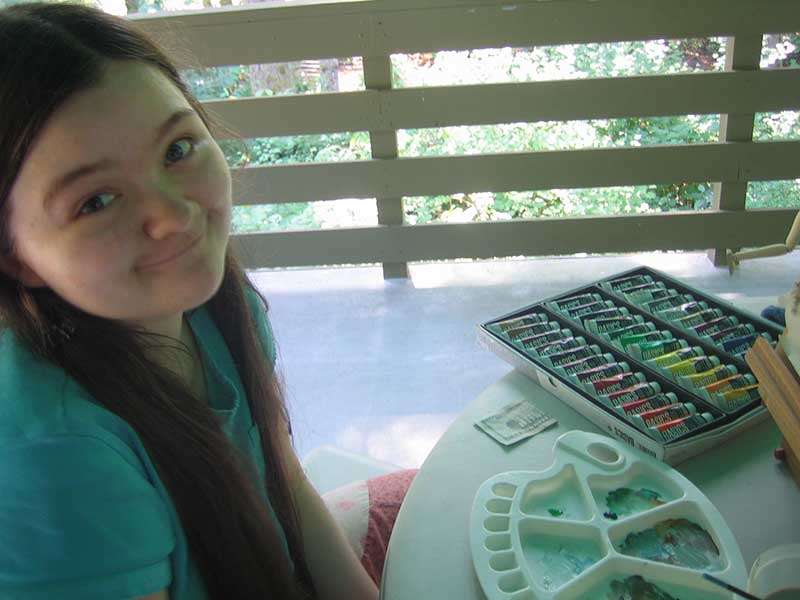 And Mike!
Mikey is SO organized, it's really funny.  He wants to know when we're leaving.  "As soon as we're all ready,"  I say, or maybe, "When I feel like it."

I asked Mike to put the fish sticks on the tray with space between them, and this is what I got: 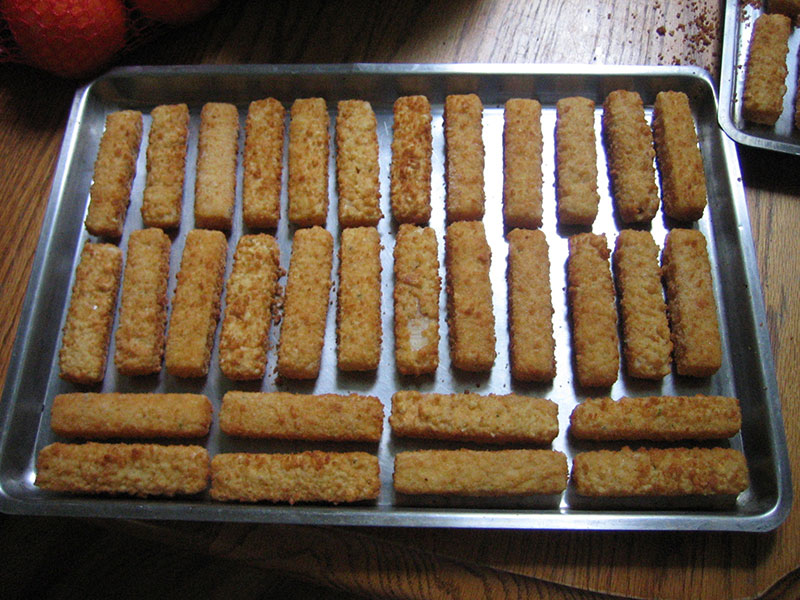 I asked Mike to wash the silverware: 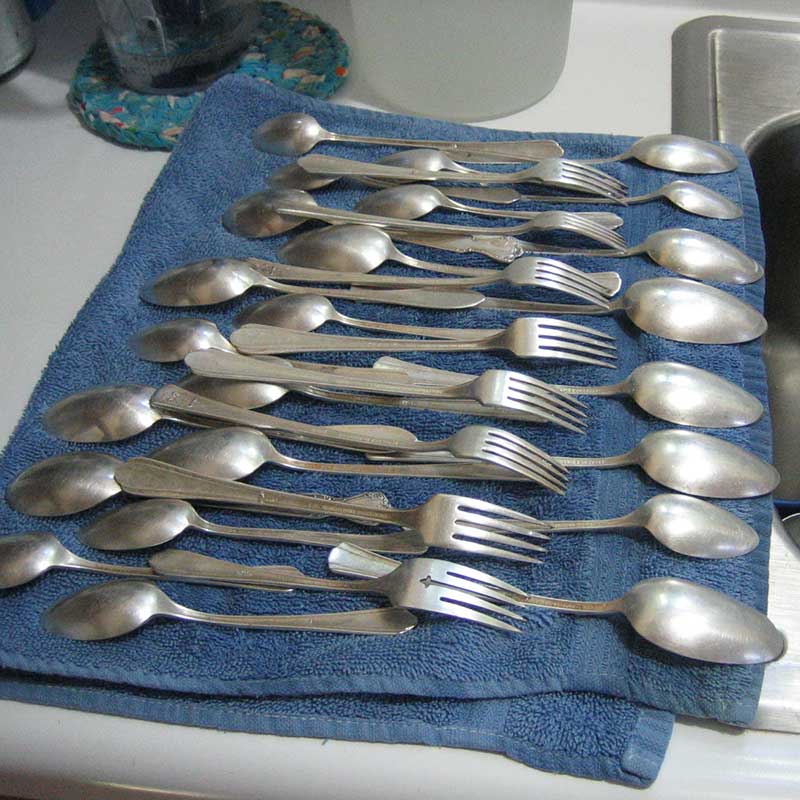 I want Mike to be a fireman when he grows up. With his organization and hard work and his caring people skills, he'll have no problem, and those huge eyes and wide shoulders he's getting, he'll be on the calendar for sure.

Cleanliness, that's another thing they never inherited from me. I'm an old time shirking expert. My poor mother had an impossible time with me from birth onwards, because I was always very careful how I treated my toys, but extremely random about when or if I put them away. I definitely would never CLEAN anything. Housework? I was allergic, and if pressed and given no way out, I'd do it halfway, the first, second and third tries. It was easier for Mom to do it herself and she basically gave up.

But I asked Karen to clean the recycle basket, which was all icky with dried dribbly gunk at the bottom, and this is what I got! 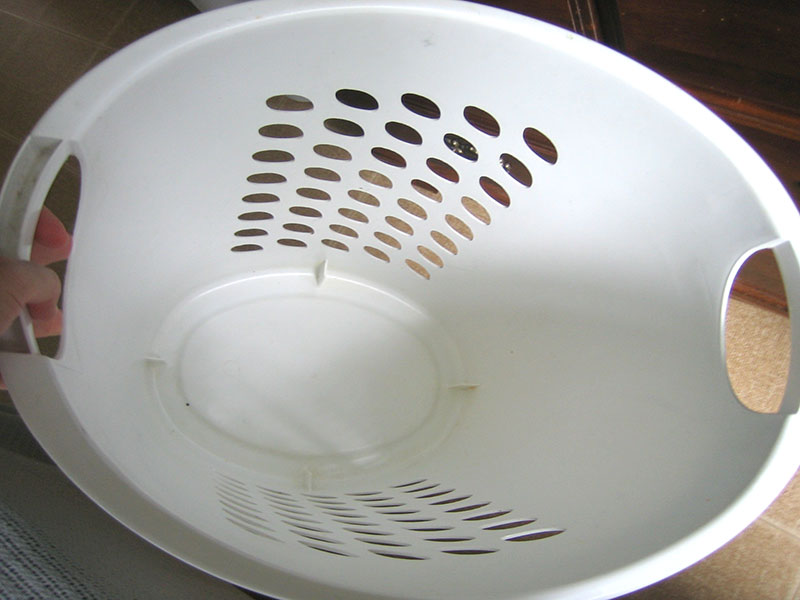 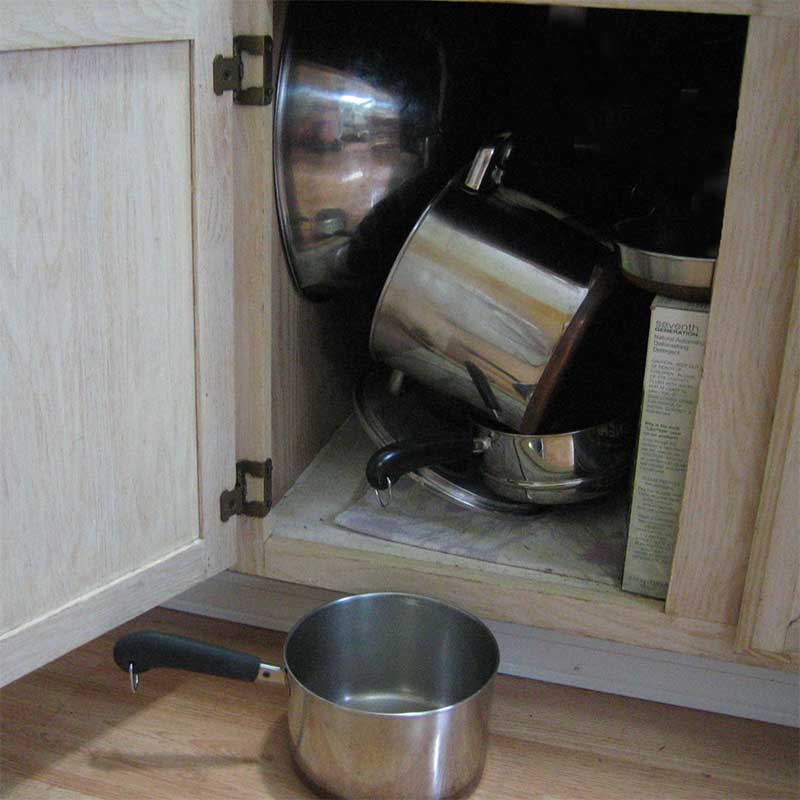